This article is about the song as learned in-game. For the track from the Original Soundtrack, see Requiem of Spirit (Ocarina of Time Soundtrack). 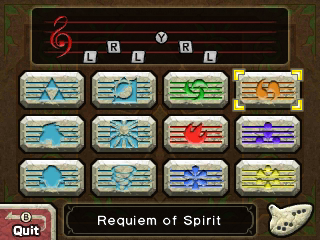 The Requiem of Spirit is the final song learned for the Ocarina in Ocarina of Time. It is the sixth and last teleporting song. It will teleport Link to the Triforce Pedestal in Desert Colossus, just outside the Spirit Temple.

After Link has received the Gerudo Token and arrived at Desert Colossus, on the other side of the desert, he can enter the Spirit Temple. Link finds that there is nowhere he can go except back outside. When Link exits the Spirit Temple, Sheik appears in front of him. Sheik tells Link that he has to go back in time, and teaches him the Requiem of Spirit, which is the only way to get back there as young Link.

How To Play It