This article is about the song as learned in-game. For the tracks based on it from the Ocarina of Time Original Soundtrack, see Ocarina "Song of Storms" and Windmill Hut (Theme). 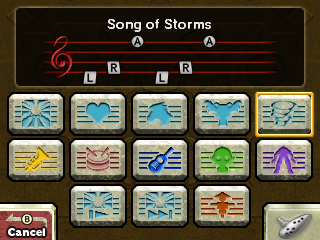 The Song of Storms is a song that conjures up storms. It is featured in the Nintendo 64 games of The Legend of Zelda series; Ocarina of Time and Majora's Mask.

It is obtained by learning it as an adult in Ocarina of Time (which ultimately leads to the infamous Song of Storms paradox), and from Flat in Ikana Graveyard in Majora's Mask.

As stated before, the song conjures up storms from nowhere. In both games, the song has similar uses and very different ones too.

The Song of Storms is learned from the Phonogram Man in Kakariko Village as an adult. He claims a young boy played the song and it messed up the Windmill. This is odd, as it is clearly referring to Link, who had yet to return to the past to complete the paradox.

The song's main use is to get into the Bottom of the Well to obtain the Lens of Truth. Just outside the Spirit Temple, at the Desert Colossus, the song can be used to fill a pond up where fairies will be. Song of Storms can be played for some frogs to get a Piece of Heart. It can also be used to reveal hidden holes.

The Song of Storms is learned in Ikana Graveyard after listening to Flat's eulogy. It is written on his grave, much like the Sun's Song was in Ocarina of Time.

The song can be used to grow Magic Beans into fully grown plants that can be ridden by Link, instead of using Spring Water. The song is also used to get rid of the Blue Bubbles' curse. It can be used, again, to reveal hidden holes, although its main use is to play it for Sharp to help him break his curse and cause the river to flow through Ikana Canyon, which in turn activates the Music Box House.

In Ocarina of Time and Majora's Mask, the button sequence is A↓↑A↓↑

In Ocarina of Time 3D, the button sequence is L R A L R A