From Zelda Dungeon Wiki
Jump to navigation Jump to search
Want an adless experience? Log in or Create an account.
Frog 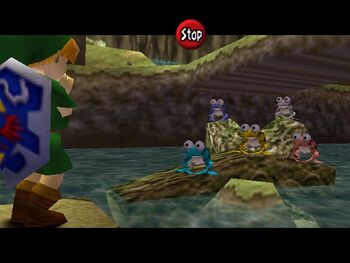 The Fabulous Five Froggish Tenors from Ocarina of Time

Frogs are a recurring race that have made appearances in several titles in The Legend of Zelda series.

Mamu the giant frog will teach Link the Frog's Song of Soul for a hefty fee in Rupees. In Richard's Villa in southern Koholint Island, where Richard currently lives after being chased out of Kanalet Castle, several frogs can be found residing in the villa.

On Zora's River, Link can find the Fabulous Five Froggish Tenors. These frogs are a quintet that sing together in harmony. If Link plays different ocarina songs for the frogs, they will give him Purple Rupees, worth 50 Rupees. More importantly, if he plays the Song of Storms, they will drop a Piece of Heart.

At the Lakeside Laboratory, while Link is in the midst of acquiring the Biggoron's Sword, he finds that he needs the Eyeball Frog to create Eye Drops for Biggoron. After receiving it from King Zora De Bon XVI at Zora's Domain, he must bring it to the Lake Scientist on horseback for increased speed, as the Eyeball Frog spoils quickly.

In Majora's Mask, frogs occur in the forms of Don Gero's Frog Choir and the Gekko in the Woodfall Temple and Great Bay Temple. If Link gathers all the frogs in the Frog Choir after obtaining the Don Gero's Mask, he will be able to reunite them after defeating Goht and returning springtime to Snowhead.

The mini-boss Gekko can be found in Woodfall Temple and Great Bay Temple, and after defeating them, Link needs to talk to them wearing the Don Gero's Mask. They will then travel to the Mountain Village where the leader of the Frog Choir is. The choir consists of five frogs, so the other two reside in Clock Town's Laundry Pool and on top of a log in the Southern Swamp that can only be accessed by paying for Old Koume's Boat Cruise (which is only accessible after clearing the Woodfall Temple).

When all five are together again, they will sing in harmony and Link will receive a Piece of Heart as his reward.

Across the Great Sea roam the wind deities Cyclos and Zephos. Link must fight Cyclos on the Great Sea to gain the power of the "Ballad of Gales", which allows him to warp to certain islands. Zephos informs Link that his brother Cyclos is angered because his small monument on Dragon Roost Island has been destroyed, so he decides to wreak havoc on the citizens of the sea.

The Deku Toad mini-boss in the Lakebed Temple is a large toad that Link must fight and defeat in order to gain the Clawshot, an important item in Twilight Princess.

Frogs also hop about leisurely in Link's home village of Ordon. If Link transforms into Wolf Link, he will be able to talk to all animals, including the frogs that take up residence in the village.

The Frog Lure, a special lure that can be used at Hena's Fishing Hole, can only be obtained after Link clears all eight levels of the Rollgoal game inside of the Fishing Hole building. This is the only lure that is capable of catching a full-sized Hylian Loach when lure fishing.

Golden Chief Cylos is a large frog that commands the Golden Frogs exists in the World of the Ocean King. His design is heavily based on those of Cyclos and Zephos from Wind Waker.