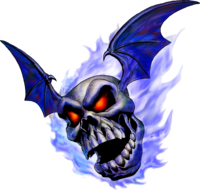 Blue Bubbles are a recurring variation of the Bubble in The Legend of Zelda series. They appear in Ocarina of Time, Majora's Mask, and The Wind Waker. Their main ability is to curse their enemy and usually can only be defeated once their blue flame has been extinguished.

In Ocarina of Time, Blue Bubbles can be found in the Forest Temple. These skulls cannot be harmed until their flames are extinguished. This can be done by either running into them with the Shield or stunning them with Deku Nuts or the Hookshot. Once Link has the Fairy Bow, he can shoot at them and defeat them without having to extinguish their flames. They do not jinx Link like they do in Majora's Mask.

In Majora's Mask, Blue Bubbles chase after Link and if they come into contact with him, 'jinx' him. This makes Link unable to pull out the Sword and use it. To get rid of the curse, Link can let the curse run out on its own or play the Song of Storms. If a Blue Bubble is defeated with a Light Arrow, it drops 50 Rupees.

Blue Bubbles in The Wind Waker appear in many dungeons, such as the Earth Temple or the Savage Labyrinth. Like in Majora's Mask, Blue Bubbles jinx Link and make him unable to use any of his items. Link can defeat them with the Hero's Bow or blow out their blue flame with a gust of wind from the Deku Leaf.