From Zelda Dungeon Wiki
Jump to navigation Jump to search
Want an adless experience? Log in or Create an account.
Big Deku Baba 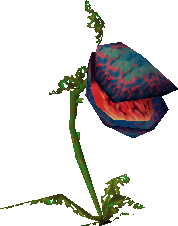 Big Deku Babas are carnivorous plant enemies that appear in Ocarina of Time.

A Big Deku Baba is a larger variation of the original, first seen in Ocarina of Time. It is a bit stronger but has the same attacks. By far the best way to kill it is to use a well timed Jump Attack. Another way to defeat one is to target it and use the shield, then walk forward and taunt it into attacking-once the head lunges out, start attacking it. It is a somewhat risky method though.

When defeated, it will drop Deku Nuts if its head was struck, however, if it was struck in the neck it will leave behind a Deku Stick, much like a Withered Deku Baba. It will constantly regrow every now and then. The Big Deku Baba can be found in Kokiri Forest and inside the Forest Temple as an adult. Big Deku Babas also can be found in Link's childhood in Master Quest.