From Zelda Dungeon Wiki
Jump to navigation Jump to search
Want an adless experience? Log in or Create an account.
Jump Attack 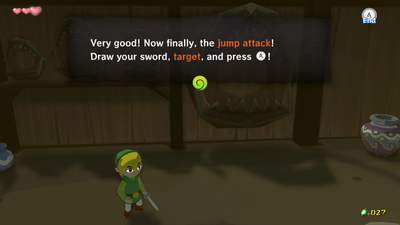 The Jump Attack is a sword technique that has appeared in every 3D The Legend of Zelda game. Link leaps through the air with his sword drawn, bringing it down to the ground in a strike that is usually more powerful than a regular sword slash.

The Jump Attack usually does double the damage of a normal attack with the same sword. At the same time, it takes more time to do, and Link is more likely to take damage if he is being attacked when he performs this action. The skill first appeared in Ocarina of Time. In Ocarina of Time, the "attack" prompt is shown on the A button HUD even when Link's sword is not drawn. Doing so without a sword simply provokes a forward roll. Link can not perform this action while shielding. In the 3D games, Link presses the Z-Trigger or L button in order to go into targeting mode. In most of the games, pressing "A" with the sword drawn (usually "B") in targeting mode usually performs the attack.

In The Wind Waker, the jump attack is one of the many sword techniques taught to Link by Orca during the Sword Training. It is the sixth sword attack learned and it is performed by targeting an enemy using 'ZL', and then pressing 'A' to leap and perform a jump attack.[1]