From Zelda Dungeon Wiki
Jump to navigation Jump to search
Want an adless experience? Log in or Create an account.
Skullfish 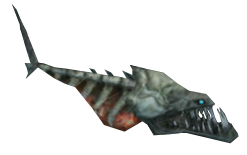 The Skullfish is also a catchable fish in Majora's Mask 3D. It lives in the Ocean Fishing Hole.[1] It can be caught from 6 p.m to 6 a.m every day. If Link wears the Captain's Hat, this fish approaches him.

In Twilight Princess, Skullfish appear in the Lakebed Temple. Like in Majora's Mask, they will follow [[Link Link and try to attack him by biting him. These creatures tend to appear in small groups. They are easily defeated using the Clawshot or the Hero's Bow. Since Link has limited speed and abilities while underwater, Skullfish are much easier to defeat with projectile weapons from the surface.

Link can use his Fishing Rod to catch a Skullfish, but they are considered forbidden fish and they are not recorded within Link's Fish Journal.[2] However, the game does keep a hidden record of the biggest Skullfish that Link has caught. These fish are some of the easiest fish to catch and each time Link catches one, they will leave behind a Recovery Heart for Link to collect. Since Link cannot keep the fish, it will then flop around on land and they are very easy to defeat.