From Zelda Dungeon Wiki
Jump to navigation Jump to search
Want an adless experience? Log in or Create an account.
Freezard 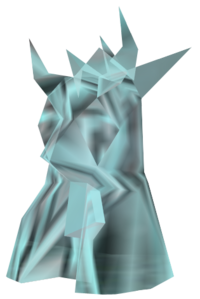 Model from Ocarina of Time and Majora's Mask

Freezards are recurring enemies in The Legend of Zelda series. They appear as stationary ice statues that breathe out powerful gusts of freezing wind.

In Ocarina of Time, Freezards appear within the Ice Cavern and Ganon's Castle. Some Freezards will initially be completely invisible and will only reveal them selves to you as they slide towards you.

Link should wait for a grab in their attack and then jump in for the kill. A good way to do so is to use the Hookshot for the initial attack, following by immediate sword slashes. The preferred way to defeat them is to use Din's Fire as the fire will melt the ice.

In Majora's Mask, Freezards appear exclusively within the Snowhead Temple and they are exactly the same as in Ocarina of Time.

Freezards are no longer vulnerable to Link's sword, but instead, he needs to use the Ball and Chain to defeat them. It takes two direct hits with the Ball and Chain to defeat the Freezards. After a Freezard has been defeated, it splits into four to five Mini-Freezards. Alternatively, Link can defeat a Freezard by using the Cannons that can be found in the Snowpeak Ruins. Freezards act more like an obstacle rather than an enemy, as most of the time, they are stationary and are used to block doorways.