From Zelda Dungeon Wiki
Jump to navigation Jump to search
Want an adless experience? Log in or Create an account.
Ganon's Castle 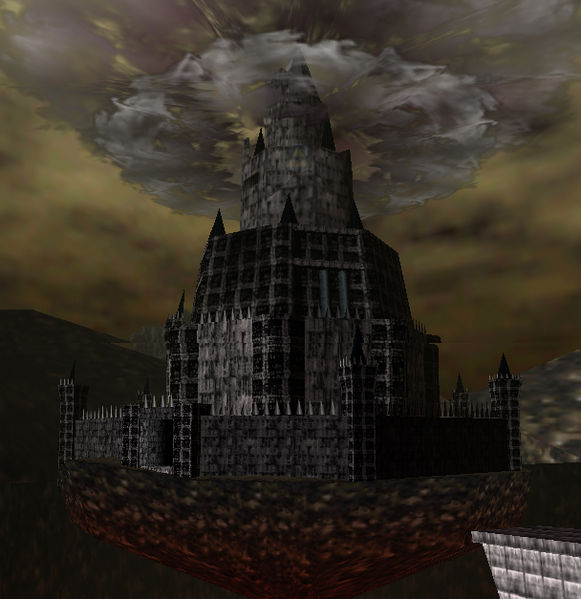 When Link heads to Hyrule Castle in the past, wielding all three Spiritual Stones, he witnesses Princess Zelda riding out with Impa, and Zelda throws the Ocarina of Time into the moat. They are closely followed by Ganondorf, who questions Link a bit. So Link heads to the Temple of Time, in which he plays the Song of Time, and picks up the Master Sword, which is his ticket to the Sacred Realm. Trouble unfolds when Ganondorf follows him in, when he wields the Triforce of Power. Seven years later, Link awakens as the true Hero of Time. Link goes to the Market to find out it is in shambles, and now inhabited by ReDeads. If Link goes up the path to Hyrule Castle, he realizes Ganondorf has destroyed it, and built a new castle in its place, Ganon's Castle.

Once Link has completed the five temples and awakened the Six Sages, he can head to the former location of Hyrule Castle. There, accompanied by an announcement from Rauru, the Sages create a magical bridge across the sea of lava. Link can now simply go across it and enter the large doorway to appear inside Ganon's Castle.

Ganon's Castle has Trials corresponding to the six temples; the Forest Temple, the Fire Temple, the Water Temple, the Shadow Temple, the Spirit Temple, and the Temple of Light. Each one has a barrier that Link must disrupt with Light Arrows, which allows the Sage of the corresponding temple to destroy it. Inside the Shadow Trial section, Link finds the Golden Gauntlets, which are needed to finish the Fire Trial. (Also requiring the Gauntlets, there is a secret outside, behind a giant gray rock, in which the Great Fairy of Courage is hiding. If Link plays Zelda's Lullaby, she enhances Link's defense, meaning he takes half damage from enemies.) Back inside, with all barriers destroyed, Link finally enters Ganon's Tower.

Passing through all these leads Link to the top of the tower, to face off with the Great King of Evil, Ganondorf.

The battle with Ganondorf, in which Z-Targeting cannot be used, begins with a round of Dead Man's Volley - if Link successfully out-rallies Ganondorf, stunning him, he can shoot a Light Arrow to temporarily bring him down, allowing him to jump across and use his sword to deal damage. After several rounds, Ganondorf will randomly begin to summon a ball of energy which splits and cannot be returned by Link. He can either dodge this, or shoot Ganondorf with a Light Arrow during the summoning animation.

Once enough damage is done, Ganondorf will fall, fatally injured, and destroy the top of the tower. Zelda will then escape from her forcefield and lead Link down the tower and outside before it fully collapses.

After climbing down Ganon's Castle, Link faces off with Ganon, Ganondorf's beast form, created using the Triforce of Power. For the first round, Ganon will knock the Master Sword away behind a wall of flame, and Link must hit Ganon's tail with another weapon. Light Arrows can be used to stun him and make it easier to get behind him.

After enough damage is dealt, Ganon is stunned, and the wall of fire will temporarily collapse. Once Link has retrieved the Master Sword, he revives, and the second phase is very similar to the first, except that damage *must* be dealt with the Master Sword.

Enough swipes to the tail brings Ganon to his knees, allowing Zelda to hold him down and Link to stab him in the head with the Master Sword. This sends Ganon into a rage, allowing the Sages to seal him in the Dark World.