This is a list of dungeons found in Ocarina of Time.

Inside the Deku Tree

Main article: Inside the Deku Tree

Located in Kokiri Forest, Inside the Deku Tree is the first dungeon of the game, and can be entered after obtaining the Kokiri Sword and Deku Shield and speaking with the Deku Tree. The dungeon mostly features simpler enemies such as Deku Baba and Skulltulas. It also includes many easier puzzles to ease the player into the game. The dungeon is fairly short; one can find the Fairy Slingshot and defeat Queen Gohma in only ten minutes of play time. Upon completing this dungeon, Link receives the Kokiri's Emerald, the first of three Spiritual Stones, and a Heart Container.

The Dodongo's Cavern is located partway up Death Mountain. After getting the Goron's Bracelet from Darunia, Link can enter the cavern by using a Bomb Flower. This dungeon introduces many new Fire-based enemies like the Dodongo and Fire Keese, making a Hylian Shield helpful. The dungeon item is the Bomb Bag and Bombs, and many of its puzzles involve using Bombs as a result. After defeating the boss, King Dodongo, Link receives the Goron's Ruby and his second Heart Container.

Another dungeon located inside a guardian creature, Jabu-Jabu's Belly is found in Zora's Fountain behind Zora's Domain. To enter, use the Silver Scale to find Ruto's Letter in Lake Hylia, then show this letter to King Zora. Use the bottle to capture a fish and drop it before Lord Jabu-Jabu to be sucked inside his belly. As Princess Ruto is Link's primary objective, her help is needed to open certain doors and keep switches pressed. The dungeon item, the Boomerang, also becomes very helpful for defeating the electric-based creatures throughout the dungeon. Defeating dungeon boss Barinade rewards the player with the Zora's Sapphire and a third Heart Container.

Bottom of the Well 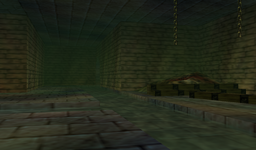 Main article: Bottom of the Well

Found in Kakariko Village, the Bottom of the Well can be accessed by learning the Song of Storms from the Phonogram Man in the future, then returning as a child and playing the song in the Windmill. As it is intended to be accessed after some of the adult dungeons, Bottom of the Well has much more difficult enemies than the other three child-only dungeons. This includes ReDeads, Like Likes, and the miniboss Dead Hand. The dungeon's only reward is the Lens of Truth, which is necessary to access the Spirit Temple and Shadow Temple.

Upon obtaining the Hookshot from Dampé's ghost, Link can return the Sacred Forest Meadow after playing Saria's Song to Mido to prove himself a friend of Saria. After learning the Minuet of Forest from Sheik, Link can enter the Forest Temple. This is the first dungeon with Small Keys and tougher enemies like the Stalfos. After finding the Fairy Bow, Link destroys each of the four Poe Sisters to open the way to the depths of the temple and face Phantom Ganon. This awakens Saria as a Sage and grants Link the Forest Medallion alongside a Heart Container. He can then return to the Temple of Time to learn the Prelude of Light from Sheik. 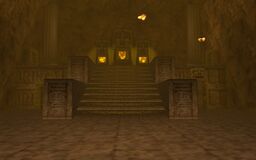 With the help of the Goron Tunic Link enters Death Mountain Crater, where Sheik teaches him the Bolero of Fire. He enters the Fire Temple, reunites with Darunia, and frees the captured Gorons in the temple one by one. After facing down numerous burning creatures including the unique Flare Dancer mini-boss, he eventually finds the Megaton Hammer and wields it against the dragon Volvagia. This allows Darunia to awaken as a Sage and grants Link the Fire Medallion and another Heart Container.

Behind the frozen Zora's Domain is this frigid mini-dungeon filled with icy enemies like the Freezard. In this dungeon Link must use the strange Blue Fire to melt frozen structures to advance. At the dungeon's end, Link slays a white Wolfos before finding the Iron Boots. Sheik then appears and teaches Link the Serenade of Water. Being a mini-dungeon, Link does not receive a Heart Container for his exploits here.

Link must use his new Iron Boots to sink to the bottom of Lake Hylia and dislodge the lock with his Hookshot to find the Water Temple. In the temple, Link meets up with Princess Ruto again, who leads Link further into the dungeon, where he must raise and lower the water level constantly to find a complex collection of Small Keys to advance. He is eventually confronted by Dark Link, and upon conquering himself he finds the Longshot. With the Longshot, Iron Boots, and Zora Tunic combined, he is able to traverse the dungeon and defeat its master, Morpha. Breaking Morpha's influence lets Ruto awaken as a sage and earns Link the Water Medallion as well as yet another Heart Container.

When Link returns to Kakariko Village with four medallions, he finds the village in flames. Sheik will warn Link to stay back before a shadowy figure emerges from the well and knocks them both unconscious. When Link wakes up, Sheik teaches him the Nocturne of Shadow. Link must play the song to reach the Shadow Temple; with the Lens of Truth in hand, gains entry using Din's Fire. Within the temple Link finds a dungeon similar to The Bottom of the Well as it is filled with Redeads, Stalfos, and Skulltulas as well as another Dead Hand. This dungeon touches on Hyrule's less known dark side. The dungeon item is the Hover Boots, which are required to delve deeper into the harrowing dungeon. Finally, Link comes face-to-face with the dark creature Bongo Bongo. Killing the creature helps Impa of the Sheikah to awaken as a Sage. Link is given the Shadow Medallion and a Heart Container for his efforts. 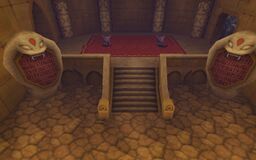 Link must be recognized as a Gerudo to reach the Haunted Wasteland. He uses the Longshot and Lens of Truth to eventually reach the Desert Colossus, where Sheik appears and teaches him the Requiem of Spirit so he can return as a child. He does so and meets the Gerudo thief Nabooru. As a child again he must defeat his first Iron Knuckle to receive the Silver Gauntlets. The dungeon itself only has one or two new enemies such as the Anubis. As an adult, Link uses the power of the Silver Gauntlets to delve into the rest of the temple and find the Mirror Shield. With the shield, he finally confronts Twinrova and reflects their powers with the Mirror Shield to free Nabooru and awaken her as a sage. Link then receives one final Heart Container and the Spirit Medallion. 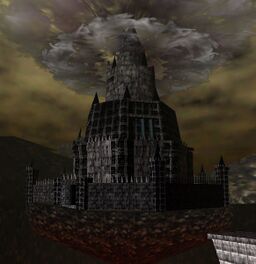 Link is finally reunited with Princess Zelda, who has masqueraded as Sheik all this time. She grants Link the Light Arrows before being captured by Ganondorf. Link uses the sages' power to break the six seals of Ganon's Tower, each based upon their respective medallions. He obtains the Golden Gauntlets here before climbing to the top of the tower. Here, he confronts Ganondorf in a match of Dead Man's Volley before defeating the evil king, who then brings the whole tower down on them in his last breath. Link and Zelda escape, but from the wreckage Ganon finally emerges. This is the final boss of the game; if Link wins, the game is won.