From Zelda Dungeon Wiki
Jump to navigation Jump to search
Want an adless experience? Log in or Create an account.
Poe Sisters 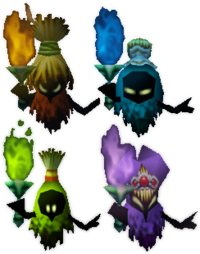 The Poe Sisters are a group of four female Poes in Ocarina of Time and Majora's Mask. They also appear in Oracle of Seasons, but only as a pair. They are named Joelle, Amy, Beth and Meg. They differ in appearance, but are mostly fought in the same way, with the exception of Meg.[1][2][3][4]

The Poe Sisters are only found in the Forest Temple. Link is required to defeat each one to face Phantom Ganon.

Joelle and Beth are found in portraits, while Amy requires Link to complete a Sliding Puzzle. After defeating the first three, Meg is found near the entrance of the dungeon, crying over the loss of her sisters. After defeating all four Poe Sisters, Link gains access to the basement where Phantom Ganon awaits him.

The Poe Sisters can be found in the back room of the Spirit House in Ikana Canyon. If at the Poe Collector's request, Link is able to defeat the four sisters in under three minutes, after which he is awarded a Piece of Heart.

Two Poe Sisters dubbed Amy and Margaret are the mini-bosses of the Explorer's Crypt in Oracle of Seasons. One fights with a lantern, the other charges with a sword. The two gradually diminish the lights in their respective rooms. Link must follow them and fights one in the adjacent room. He later fights both. During this phase, Link must take heed to prevent the torches from being extinguished or he will be reverted to the start of the dungeon.[5]