This is a list of bosses found in The Wind Waker. 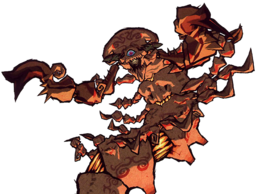 Gohma is the boss of the first dungeon in The Wind Waker, Dragon Roost Cavern. Link must use the Grappling Hook to grab Valoo's tail and swing over to the other side of the room. This causes part of the ceiling to fall onto Gohma, weakening her shell. After doing this three times, Gohma's shell will break completely, exposing her eye. Link can then lock onto her eye and use the Grappling Hook to bring her close to him, and then slash her eye with the Sword. After repeating this process Gohma will be defeated. 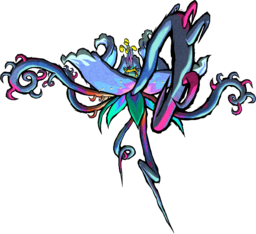 Kalle Demos is the boss of the second dungeon in The Wind Waker, the Forbidden Woods. Link must use the Boomerang to cut its vines from the ceiling, which will cause it to fall and spread out across the floor, exposing its head. Link can then strike its head with the Sword until it closes back up and reattaches itself to the ceiling. After repeating this process a few times Kalle Demos will be defeated. 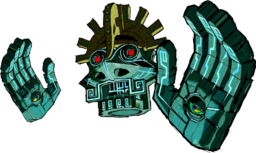 Gohdan is the boss of the third dungeon in The Wind Waker, the Tower of the Gods. Link must use the Hero's Bow to disable both of Gohdan's hands, then shoot out both of his eyes. Gohdan will then fall to the floor with his mouth open. Link can then quickly throw a bomb into Gohdan's mouth and it will explode inside of him. Do this three times to defeat him. 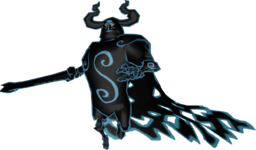 Phantom Ganon is a mini-boss that Link faces upon entering the Forsaken Fortress for the second time in The Wind Waker. Link must play Dead Man's Volley with him, then attack him when he is stunned. Occasionally Phantom Ganon will appear directly behind Link. If this happens, Link must quickly turn around and slash him with the Master Sword. It doesn't take much for Phantom Ganon to give up and disappear.

The Helmaroc King is the boss of the Forsaken Fortress in The Wind Waker. He is a giant bird, who under the command of Ganondorf. As his main task, he searches and kidnaps girls with an appearance similar to that of Princess Zelda. The Helmaroc King is fought in 2 stages, after Link climbs to the top of the Fortress. In the first stage, Link must climb up the ramp against the wall to avoid the water flooding the building. As Link nears the top, the bird will stand in his way. When he presents his head, Link can hit it with the Skull Hammer and break his helm. After climbing to the top of the Fortress the second stage begins. Here, the Helmaroc King will fly around for a while. He might flap his wings to blow Link off to the edge of the tower where there are spikes, hit Link with his beak, or trying to run Link over with his claws. The strategy of the 2nd stage is to use the Skull Hammer to destroy his helm and hit his face multiple times when the beast lands on the ground, walks towards Link, and digs his head into the ground. Keep hitting his head with the hammer to eventually break his helm and later finish him off for all with the Master Sword. 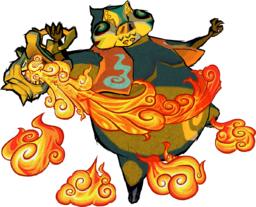 Jalhalla is the boss of the Earth Temple, the fourth dungeon in The Wind Waker. Link must use the Mirror Shield to reflect light onto Jalhalla, fully exposing him and temporarily stunning him. Link must then pick up Jalhalla and toss him towards one of the spiked stone pillars which causes him to burst into multiple Poes. Defeat each Poe using either the Master Sword or the Hero's Bow until they reassemble back into Jalhalla. Repeat the process until all of the individual Poes have been defeated.

Molgera is the boss of the Wind Temple, the fifth dungeon in The Wind Waker. When Molgera emerges from the sand in the center of the room, Link must use the Hookshot to grab Molgera's tongue and bring it close to him to slash it with the Master Sword. After a few hits, Molgera will fly around the room as Lanmolas try to attack you. If Link is quick enough, he can use the Hookshot to grab Molgera's tongue right before he burrows back into the sand. Strike his tongue enough times to defeat him.

Phantom Ganon is the mini-boss of the final dungeon in The Wind Waker, Ganon's Tower, before the confrontation with Ganondorf. The battle with Phantom Ganon begins when Link drops down into the dungeon maze. The battle progresses much the same as the previous battle in Forsaken Fortress. However, this time around Phantom Ganon disappears after one hit and his sword will remain with the handle pointing towards the correct door to go through next. If the correct path through the maze is known, Link can simply walk through without engaging Phantom Ganon until the final room. When he is defeated in the final room, Link will acquire the Light Arrows. Upon returning to the main chamber before entering the maze, another battle with Phantom Ganon will begin. This time, Link can simply shoot him with a single Light Arrow to defeat him for good. 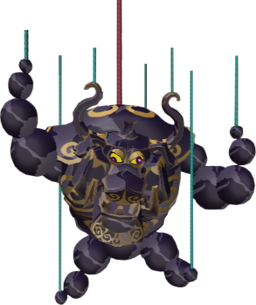 Puppet Ganon is a boss of the final dungeon in The Wind Waker, Ganon's Tower. It has three different forms that Link must overcome. In each form, Link must shoot a crystal ball on the end of its leg or tail three times. After it is defeated, nothing else stands in the way between Link and his final confrontation with Ganondorf. 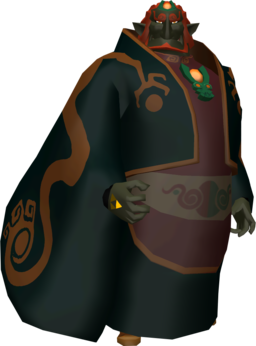 Ganondorf is the final boss in The Wind Waker. The battle is fought on top of Ganon's Tower. With the help of Princess Zelda, Link can finally defeat Ganondorf. During the battle, Link should parry attack Ganondorf. Over time, the parry attack doesn't seem to have as strong an effect. Princess Zelda will use her Light Arrows to stun Ganondorf. When Ganondorf is shocked by the Light Arrows, Link should attack him with the Master Sword. It is important that Zelda and Link are aligned, so that neither Link loses life nor are the arrows lost. At any point where Ganondorf is stunned, Link should run up to him and parry him, delivering the last blow and leaving the Master Sword impaled in his head.