From Zelda Dungeon Wiki
Jump to navigation Jump to search
Want an adless experience? Log in or Create an account.
Dead Man's Volley 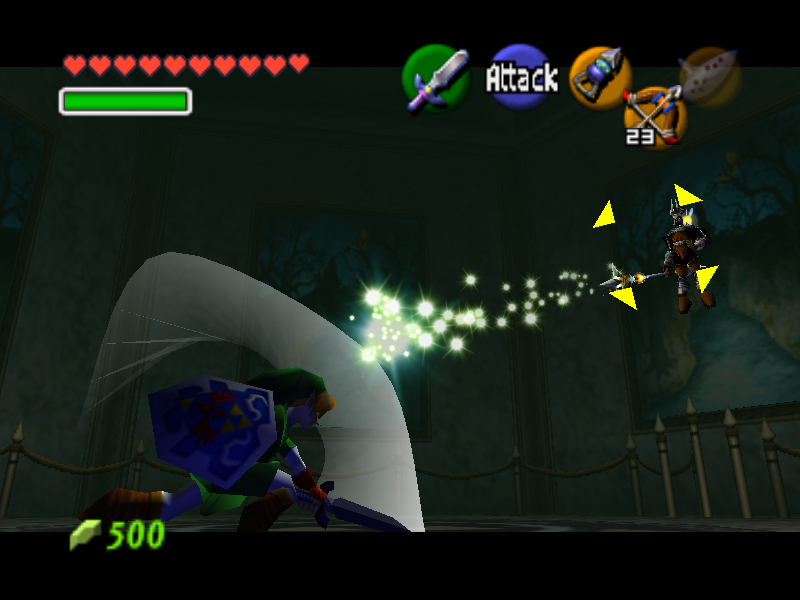 Dead Man's Volley is a commonly reoccurring battle technique in The Legend of Zelda series. First appearing in A Link to the Past, the Dead Man's Volley involves what is essentially a game of Tennis between Link and an opponent. This opponent is usually Ganondorf, Phantom Ganon, or some other manifestation of the Evil King.

This battle practice was first seen in the battle with Agahnim in A Link to the Past, though its most iconic appearance was in the battle with Ganondorf in Ocarina of Time. The name "Dead Man's Volley" was not officially seen in-game until the Cubus Sisters in Phantom Hourglass used the title for their little "game."

In a Dead Man's Volley, the two characters will lob a damage-causing object (usually a ball of dark energy) back and forth. The volley will proceed at gradually faster rates until one character falters and is hit. In Link's case, this results in significant damage, but it is often the only way to defeat the enemy that initiates it. It almost always takes numerous volleys before one of the participants yields.

Most enemies that use the Volley will also use other attacks and tactics alongside it. For example, in Ocarina of Time, Ganondorf will occasionally release a flurry of energy balls that Link must deflect with a Spin Attack, and in Twilight Princess the possessed Zelda will perform a swooping attack with her sword between volleys.

Though it is intended for Link to use the Master Sword to deflect the volley, it has often been possible to use Bottles as well. This is an intentional inclusion by the developers in reference to A Link to the Past, where a glitch allowed the Bug Net to be used in the volley.

This is the first time the Dead Man's Volley appears in the Zelda series. When Link confronts the wizard Agahnim in Hyrule Castle after obtaining the Master Sword, their battle consists entirely of the Volley.

After charging energy in his hands, Agahnim releases one of three attacks. Two of his attacks cannot be repelled; they are a spread of electricity from his hands and a cluster of energy that disperses when it hits Link or a wall. The third attack is a solid ball of energy that Link can bounce back with his sword. Unlike other enemies who battle using the Volley, Agahnim will not attempt to hit the ball back at Link.

Due to a glitch it is also possible to reflect Agahnim's volley with the Bug Net's swing, if timed correctly. Some players even prefer the net to the Master Sword.

Agahnim's Shadow, one of the Shadow Nightmares uses this, similar to the true Agahnim in A Link to the Past.

The Dead Man's Volley occurs twice — first in battle with Phantom Ganon, where the second phase requires Link to volley back a series of glowing orbs. If he successfully outlasts Phantom Ganon, the boss is hit by his own attack and falls to the floor, vulnerable to sword slashes.

The second time is in the fight with Ganondorf himself. The basics are similar; but once he is stunned, he remains floating and must be shot with a Light Arrow to cause him to fall and become open to sword attacks. There is also an alternate attack involving a spread of energy, and this cannot be volleyed back in the normal way, although Ganondorf is open to a Light Arrow shot during the summoning animation.

While it is primarily intended for the player to use their sword to reflect the orbs, an empty Bottle will also work, similar to the Bug Net in A Link to the Past.