From Zelda Dungeon Wiki
Jump to navigation Jump to search
Want an adless experience? Log in or Create an account.
Twinrova 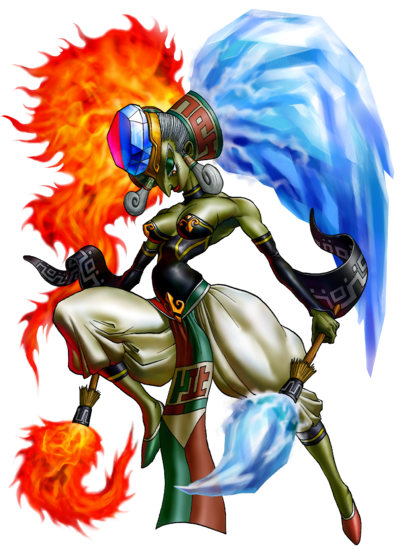 Artwork of Twinrova from Ocarina of Time

Kotake and Koume are two witches who are said to be Ganondorf's surrogate mothers. Kotake can control ice, and Koume can control fire. When combined, they are referred to as Twinrova.

When Link enters the Spirit Temple as a child, Nabooru convinces him to retrieve the Silver Gauntlets for her. Link gets them, but before he can return to Nabooru, Koume and Kotake kidnap her. They then retreat into the interior of the Spirit Temple. Link next sees them after defeating the Iron Knuckle situated right before the boss room in the Spirit Temple as an adult. They had brainwashed Nabooru to serve Ganondorf, making her fight as the Iron Knuckle. When Nabooru tries to escape the two witches teleport her away to be brainwashed again, then they taunt Link before leading him into the boss chamber.

The two witches act as the boss for the Spirit Temple. They fly around the stage trying to hit Link with their elemental magic, and he must defeat them by reflecting one witches magic to hit the other. After a while, the two witches will transform into a single entity, Twinrova, who looks younger, is larger, and wields both elemental powers of fire and ice. Link must defeat her by using her own magic against her.

When defeated, Twinrova splits back into Koume and Kotake. Halos appear over both of their heads and the two begin bickering about their age as they float upwards into rays of light. One of them yells to Link, "I'll come back to haunt you!!" while they are floating up.

Koume is in charge of the Boat Cruise. Link first meets her in the Woods of Mystery. She is injured from an attack by the Skull Kid. In order to help her, Link must give her a bottle of Red Potion. She then returns to her job. If Link stops by, she offers him one free boat ride for helping her.

Kotake runs the Magic Hags' Potion Shop, selling Red Potion, Green Potion, and Blue Potion. She only sells Blue Potion if Link has given her a Magic Mushroom within the current three-day cycle. If Link tells Kotake about Koume's injury, she gives him his first Bottle, filled with Red Potion. If she has already given Link a Bottle, she simply fills it with Red Potion for free.

After completing the Woodfall Temple, the poisoned water of the Southern Swamp disappears. If Link has also saved Koume within the Woods of Mystery, she begins to run the Target Shooting where Link can earn a Piece of Heart in the N64 version of the game, or an Empty Bottle in the 3DS version of the game.

Koume and Kotake (together known as Twinrova) are two witches whose intentions are to revive the evil king Ganon. They enact their plan by persuading Veran to wreak havoc in the land of Labrynna, and Onox to do the same in Holodrum. The actions of Veran and Onox will light the Flame of Sorrow and Flame of Destruction, two of the three needed in the ritual to revive Ganon.

Though Link put an end to Veran and Onox, the damage done to Labrynna and Holodrum proves to still be enough to light the first two flames. To finish the ritual and light the final Flame of Despair, Twinrova kidnaps Princess Zelda to use as a sacrifice.

Once Link is able to defeat Koume and Kotake separately, the two fuse into one entity and become even more powerful foe. After Link defeats Twinrova, thus saving Princess Zelda, the witches choose to sacrifice their own body as a vessel to revive Ganon. However, because the ritual is not carried out using Zelda as planned, only a mindless, yet dangerous Ganon is able to be revived.