From Zelda Dungeon Wiki
Jump to navigation Jump to search
Want an adless experience? Log in or Create an account.
Sabooro 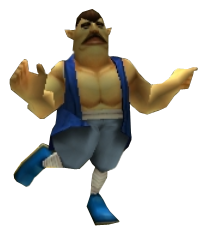 Sabooro is one of the Carpenters that appear in Ocarina of Time.

When Link is a child, Sabooro can be found within Kakariko Village where he is prancing around on top of the construction site near the center of town. If you talk to him, he mentions the Cucco Lady nearby, who works hard taking care of her Cuccos, even though she is allergic to them. Sabooro wants to help her out as he is feeling charitable.[1] This piece of information is meant to encourage Link to help the Cucco Lady, as it will lead to Link acquiring an empty Bottle. At nighttime, Sabooro will be inside one of the houses in Kakariko Village, crying that his beautiful, smooth hands are worn out from his hard work.[2]

When Link is an Adult, the Carpenters venture off to Gerudo Valley, where they are captured and held captive in the Gerudo's Fortress. Link finds Sabooro locked in a jail cell and after speaking to him, Sabooro compliments Link by stating that he has a lot of guts to get past all the guards.[3]. After defeating the Gerudo Thief to free Sabooro, he asks if Link has seen his Boss, and that he must hurry back to him.[4]

The boss of the Carpenters was hired by Impa to turn Kakariko Village into a true city like that of Hyrule Castle Town.[5]

After saving the Carpenters, they will appear back at a tent in Gerudo Valley. Sabooro will tell you that Nabooru was brainwashed by Ganondorof's followers.[6] The Carpenters will together repair the bridge over Gerudo Valley.

The name Sabooro is derived from the Japanese name Saburo, which means third son.