This article is about the groups of characters who aid Link. For other "Sages", see Sage (Disambiguation). 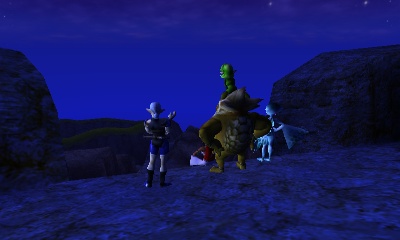 Five Sages in the credits of Ocarina of Time

The Sages, also known as the Wise Men, are a recurring group of characters in The Legend of Zelda series. There are multiple types of Sages with different purposes. Usually there are seven sages in total, although the number can vary.

In A Link to the Past, the Seven Maidens are all descendants of the Seven Wise Men that sealed Ganon during the Imprisoning War. Agahnim seeks out these maidens to send them to the Dark World, where they are trapped inside one of the dungeons in a crystal. Link goes on a quest to rescue them all. Princess Zelda is one of these maidens.

The maidens also appear in Four Swords Adventures, but it is not made clear whether they are also descendants of the Sages or not.

The Sages play a major role in Ocarina of Time. There are seven total: six of them represent an element, and the seventh is their leader. Each must be awakened in a temple to become a Sage.

Link first meets the Sages as a child, before they are awakened to their true roles. Once Link takes the Master Sword from the Pedestal of Time, he is sent seven years into the future. The Sage of Light, Rauru, meets him in the Chamber of the Sages within the Temple of Light and explains that he is the Hero of Time and he must enlist the help of the other Sages in order to defeat Ganondorf. Once Link exits the temple, Sheik expands on that, and he tells Link where each of the temples are located.

The Sages are always found in the temple that represents their element: either the Forest Temple, the Fire Temple, the Water Temple, the Shadow Temple, or the Spirit Temple. After Link defeats the boss of the temple, he will be transported to the Chamber of the Sages and briefly speak to the newly awakened Sage before returning to the physical world. They will give Link the Medallion of their element.

Once Link awakens them all, he will travel to Ganon's Castle, and the Sages will form a bridge across the lava surrounding the castle. At the end of the battle, they will combine their powers to seal Ganon away. During the credits, they can all be seen atop Death Mountain, aside from Rauru and Zelda.

Sages of Ocarina of Time

The Wind Waker only mentions two Sages: the Wind Sage and the Earth Sage. These two sages lived in Hyrule before the Great Sea flooded it, and they prayed to the gods to keep the power to repel evil in the Master Sword. They resided inside the Earth Temple and the Wind Temple, which were situated on tall mountains in Hyrule. The temples are still accessible from the sea due to the entrances above the water level on Headstone Island and Gale Isle respectively. When Ganon returned to wreak havoc upon the people of Hyrule, he killed the Sages, trapping their souls within the temples and leaving the Master Sword powerless.

Link heads to the Earth Temple is search of the sage that can restore the Master Sword's power, and he finds a large stone blocking the entrance to the temple with the directions to a song. Once Link conducts this song on the Wind Waker, the song is revealed to be the Earth God's Lyric.

A spirit Zora named Laruto appears and tells Link that she was the Earth Sage before she was killed. She says that the only way to return the power to the Master Sword is to awaken her descendant as a new Sage using the Earth God's Lyric, and bring them to the temple. She claims that her descendant holds a harp identical to her own.

Link discovers that Medli is this sage's descendant. After conducting the song for her, she agrees to go with him to the Earth Temple. She can play the Earth God's Lyric on her harp to destroy large obstacles and enter the temple. She also helps him through the temple by carrying him to far off ledges and flying to high places, as well as using her harp to direct light. In the end, Link defeats Jalhalla and Medli and Laruto play the song together, restoring half of the power to the Master Sword.

Inside the Wind Temple, Link finds a similar stone to the one in the Earth Temple and he conducts the Wind God's Aria with it. Fado appears and, similar to Laruto, he states that he is the deceased Wind Sage and that his descendant holds a violin like his.

Link finds Makar practicing on this violin behind a waterfall in the Forest Haven. Link conducts the aria for him, and the pair then travel to the Wind Temple together. Makar plays the song to destroy the stone with Link and helps him through the temple. Finally, Link defeats Molgera, and Fado and Makar play the Wind God's Aria together to restore the last of the Master Sword's power.

A group of six ghostly figures who "have guarded the Mirror of Twilight since ancient times", the Sage of Water was killed in a failed execution of Ganondorf, after which they banished the latter to the Twilight Realm.

The Lokomos are the Sages of each of the realms. There are seven Lokomo total, similar to the Sages from Ocarina of Time; however, Byrne does not act as a Sage. Anjean appears to be the leader of them. She helps Link and Zelda out in their quest to restore the Spirit Tracks from her place in the Tower of Spirits. Aside from her, all the Lokomo Sages live in Sanctuaries that match their realm. They will all play a Lokomo Song on their instrument with Link to restore the missing tracks.

In A Link Between Worlds, the Seven Sages are descendants of the Seven Maidens. After Yuga captures the seven sages and turns them into portraits, he uses them to resurrect and absorb Ganon's power. After the ceremony, the portraits are spread across the kingdom of Lorule, sealed in seven dungeons. Link then begins his quest to rescue the captured seven sages from the paintings Yuga has imprisoned them in.

Sages of A Link Between Worlds