Turtle Rock (A Link Between Worlds) 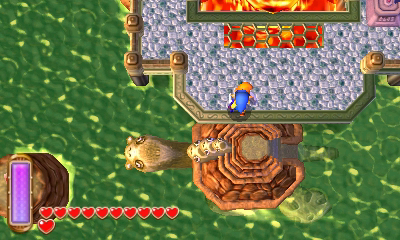 Turtle Rock, alternatively known as Turtle Palace, is a dungeon in A Link Between Worlds. Found in southeastern Lorule, Link can access Turtle Rock by saving a mother turtle's three children. He can then ride on their backs to the dungeon entrance. Link must have the Ice Rod in order to enter and complete the dungeon. Link must travel through the dungeon in order to obtain Impa's Painting.

Located in southeastern Lorule, Turtle Rock can be completed anytime after reaching Lorule. To find the dungeon's entrance, Link must save the three turtle children stranded around the Lorule Lake.

Once all three turtles are saved, Link can climb onto their backs and ride to the dungeon's entrance. Here, Link can use the Ice Rod to freeze the lava pillar nearby, making it solid. He can then merge onto it, and make his way into Turtle Rock.

As its name might imply, Turtle Rock is shaped like a turtle, with a main room and four separate areas coming off of it. The dungeon has relatively few floors, and most of the dungeon consists of playing through the two main body rooms.

Turtle Rock is a lava based dungeon, and thus many rooms consist of using the lava to Link's advantage. This is often done by the using the Ice Rod, which can freeze areas of the lava, allowing Link to travel across it.

This dungeon also features Warp Tiles that are found in no other dungeon. Each tile will warp Link to a certain area, usually to a platform that otherwise could not be reached.

Turtle Rock is the only dungeon in the game where a Piece of Heart can be reached only when navigating through the dungeon. The Hylian Shield can also be found here as the dungeon's item.

These are the enemies encountered in Turtle Rock.

The Mini-Boss of this dungeon is a group of four Fire Gimos. Link needs to use the Ice Rod in order to freeze one of the Gimos and allow it to be attacked with the sword. After this is repeated for each different enemy, the door will unlock and a green portal will appear.

The Boss of this dungeon is Grinexx. This rock monster is originally found beneath a large steel grate. To attack the monster, Link needs to use the Ice Rod whenever the beast moves under an opening in the steel platform. After a few hits, the beast will move out from the lava and confront Link.

Link can now directly attack the head of Grinexx with the Ice Rod. This can prove to be difficult however, as the boss will attack Link in several ways. It will try and stretch its long neck out at Link, or it will quickly spin its body around the room, which can be a difficult attack to avoid. The boss will also attempt to slam the platform itself, releasing a wide circle of flame that will damage Link.