Desert Palace (A Link Between Worlds)

From Zelda Dungeon Wiki
Jump to navigation Jump to search
Want an adless experience? Log in or Create an account.
Desert Palace 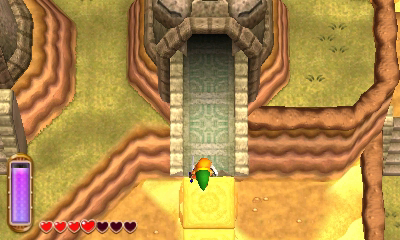 The Desert Palace is a dungeon in A Link Between Worlds. It is found in southwestern Hyrule. In order to access the dungeon it is necessary to first complete the Thieves' Hideout and rescue Osfala so that Link can rent out the Sand Rod from Ravio. Link must travel through the dungeon in order to obtain Irene's Painting.

Located in southwestern Hyrule, the Desert Palace is different than all other Lorulean dungeons, as most of it is not located within Lorule itself. To reach the dungeon, Link must make extensive use of the fissures to switch back and forth between Hyrule and Lorule. He must also use the Sand Rod in Hyrule to create pillars of sand, allowing him to reach higher platforms and new areas.

This dungeon makes extensive use of the Sand Rod in order to complete many different objectives. These features include using it to create new pathways that Link can walk on or merge onto in order to progress. Link can also use these same pillars to pull certain statues to new areas in order to solve puzzles.

Levers are also used extensively in the later part of the dungeon to bring even more sand into certain rooms, allowing Link to reach certain chests and platforms that he could not before.

Link will find the Titan's Mitt hidden within this dungeon, which will allow him to move giant boulders that will block his way.

The Desert Palace contains the most regular enemies out of any dungeon or area in the entire game, topping out at 16 different enemies.

These are the enemies you will encounter in the Desert Palace.

The Mini-Boss of this dungeon is two Devalant. Link fights them on a small platform, with only a single square of sand that can be used to defend himself. These enemies can be defeated quickly once the Sand Rod is used to bring them out of the sand, and will perish with a single sword slash.

The Boss of this dungeon is Zaganaga. This boss is found on a large sand pit, dotted by a few pillars that can be used to navigate across to the south side of the area. Link needs to use the Sand Rod to create a pathway to Zaganaga once he appears on a pillar. After reaching the boss, Link can then attack him with the sword until he disappears back into the sand. After a few sword hits, the boss will then open its mouth and attempt a different tactic.

During the second phase Zaganaga will still use the sand to navigate the area, and will still appear on certain platforms. To attack, he will release Peahats to attack Link. The boss will also shoot a large beam of sand towards Link, which can be difficult to avoid due to its large range. After hitting the boss with the sword a few more times the boss will be defeated.