From Zelda Dungeon Wiki
Jump to navigation Jump to search
Want an adless experience? Log in or Create an account.
House of Gales 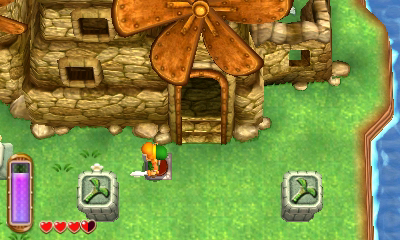 The House of Gales is a dungeon located in southeastern Hyrule within A Link Between Worlds. The Zora's Flippers and the Tornado Rod are required to enter the dungeon. Link must travel through the dungeon in order to obtain the Pendant of Wisdom. This dungeon can be entered before or after the Tower of Hera; the choice is up to Link.

The House of Gales is located on an island in the middle of Lake Hylia in southeastern Hyrule. Link cannot naturally swim to the island and must obtain the Zora's Flippers in order to reach it. To do this, Link must travel to northeastern Hyrule where the Zora's Domain is located. Link finds the Zora Queen, Oren, who has had her Smooth Gem stolen by a thief; this caused the Queen to drastically swell up. After Link has finished conversing with the Queen, the Smooth Gem can then be purchased from the Street Merchant in Kakariko Village for 200 Rupees. After giving this to Oren, she transforms back into her normal self and rewards the young hero with the Zora's Flippers, allowing him to swim in any water.

From the outside, the dungeon appears much like a windmill, with stone walls and propellers spinning in the wind. It possesses few windows, and appears to be a small house, which is rather deceiving to its large interior.

On the inside, the dungeon has simple stone floors in most rooms. The dungeon has three floors, with each floor being about two rooms tall and three rooms wide. A few of the interior rooms possess steel grates that Link must use the Tornado Rod to reach and walk across in order to reach new areas.

Many strange masks line the walls of the dungeons, along with even more fans that blow Link off any platform in the way. These fans can often be a hindrance, but can often be switched on or off or avoided entirely by merging into the walls.

A small area on the second floor of the dungeon is located outside on a small steel pathway.

These are the enemies that Link encounters in the House of Gales.

The Mini-Boss of this dungeon is two Heedles. They are lizard-like enemies whose skin burns with red-hot magma. The Tornado Rod can be used to remove cool off the Heedles, allowing them to be attacked with the sword for a few moments. Once defeated, a portal appears and the doors begin to open, allowing Link to progress.

The Boss of this dungeon is named Margomill. This giant eyeball is surrounded by a giant contraption that protects it. The Boss is located on a large platform surrounded by a pit, making the boss more difficult when it tries to attack.

Margomill can be defeated by using the Tornado Rod to fly up to the eyeball, at which point it can be attacked with the sword. After these initial hits, the sword can then be used to attack the outer contraption, bringing the eyeball closer to the floor. Link can then repeat the process from before and attack the eyeball, eventually defeating it. The reward for the completion of this dungeon is the Pendant of Wisdom.