From Zelda Dungeon Wiki
Jump to navigation Jump to search
Want an adless experience? Log in or Create an account.
Heedle 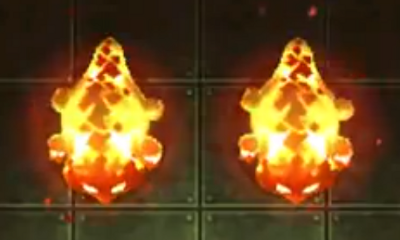 Two Heedles appear as the Mini-Bosses of the House of Gales in A Link Between Worlds. They appear as large, salamander-like monsters, whose hides are engulfed in magma.[1]

When Link enters the room in which the Heedles lie, he finds them standing side by side in the middle of the room. After noticing Link, they engulf their bodies in fire, and start to walk around aimlessly. They leave a fire trail behind them,[2] which deals half a heart of damage (two hearts in Hero Mode) if touched. In this fiery state, the Heedles are invincible. Fortunately, Link can use the Tornado Rod to extinguish their flames.[3] In their fire-less state, the Heedles are vulnerable to attacks from multiple items, including Link's Captain's Sword and the Bow.[4] After a decent number of hits, the Heedles are defeated, allowing Link access to portal which leads back to the entrance, as well as a way forward in the dungeon.