From Zelda Dungeon Wiki
Jump to navigation Jump to search
Want an adless experience? Log in or Create an account.
Margomill 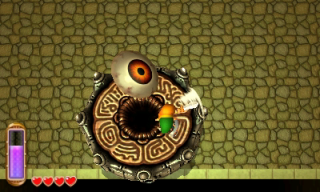 Margomill is the boss of the House of Gales in A Link Between Worlds. It is a multi-layered pillar, with an eye at the top of the it, which is of course its weak spot. This creature is the guardian of the Pendant of Wisdom.

In order to defeat the boss, Link must use the Tornado Rod to propel himself upward and slash at its eye. After doing this successfully, the boss adds more layers to its body, high enough that Link cannot get to the top with his Tornado Rod. However, Link can slash with his Sword to destroy layers of its body and repeat the process with the Tornado Rod.

Upon defeating the boss, Link receives a Heart Container and the Pendant of Wisdom.