This article is about the dungeon from A Link Between Worlds. For the interior of the Gerudo Fortress from Ocarina of Time, see Gerudo's Fortress.. 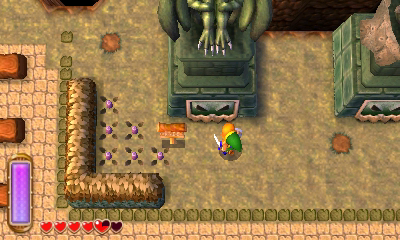 Thieves' Hideout is a dungeon in A Link Between Worlds. It is located in northern Thieves' Town, and can be completed anytime after Link reaches Lorule. No item is required to enter or complete the dungeon. Link must travel through the dungeon in order to obtain the portrait of Osfala.

Thieves' Hideout is located in northern Thieves' Town, and can only be entered after Link reaches Lorule. The dungeon entrance can be found underneath a large gargoyle statue. Once Link examines the door a voice inside will ask him to answer three questions in the form of a song. The answers to these three questions are:

Like many other dungeons in Lorule, almost all of Thieves' Hideout is located underground. It is well hidden, and the only identifying feature is the large gargoyle statue that serves as the dungeon's entrance. A second entrance also exists underneath a broken statue to the right of the first entrance, but it is locked until Link completes the dungeon.

The dungeon serves as more of a prison than a hideout, and thus features many different traps and cells for holding prisoners. Unlike most dungeons, the boss door is only a few feet away from the dungeon entrance. The Big Key is in the same room as well, but cannot be reached without help.

As Link explores the dungeon, he finds many locked cells and areas that can only be entered with the help of his Merge ability. Much of the dungeon consists of steel grate pathways that are broken, due to deterioration over time or possible sabotage by the prisoners. In specific rooms there are many moving treadmills that will drag Link into deep gaps if he is not careful.

Many areas of the dungeon contain hidden paths leading to treasure, often within the walls themselves. The dungeon makes heavy use of certain switches that can only be activated with the help of the Thief Girl. Thieves' Hideout is one of the few dungeons to make use of crystal switches, exactly like the ones found in the Tower of Hera.

Much like the Gargoyle's Domain in A Link to the Past, Thieves' Hideout involves rescuing a prisoner trapped in the depths of the dungeon. Once the girl is rescued from her prison cell, the dungeon and the dungeon's boss provide repeated attempts to steal her back, often by spawning Zazak to attack Link. If these enemies reach the Thief Girl, the Zazaks will automatically take her back to her cell, forcing Link to retrace his steps and rescue her again.

These are the enemies Link encounters in Thieves' Hideout.

The Mini-Boss of this dungeon is a group of red eyegores. They can be difficult to defeat at first, but are easier to tackle if they are not all awakened at once. Once they are defeated, a green portal will appear, and Link will be able to access a small key to open the prison of the Thief Girl.

The Boss of this dungeon is Stalblind. Stalblind appears similar to the boss Blind from Gargoyle's Domain in A Link to the Past, but is drastically different in many ways. This boss possesses a large shield and sword that has a wide range of attack and can be difficult to avoid.

Stalblind will attempt a variety of attacks, such as breathing a thick black fog that can be easily avoided. He will also attempt to spin around the room like a large tornado, which can be incredibly difficult to avoid due to the small platform and the large space the boss takes up.

To defeat Stalblind, Link needs to use the Merge ability to merge onto the boss's shield, which will temporarily confuse it. Link can then jump off the shield and attack the boss from behind with the sword. After this is repeated a few times Stalblind will throw away the shield and attempt something new.

Stalblind will now attack exclusively with his sword. The only trick here is to watch out for his sword attacks and the large tornado attack. After a few hits with the sword the boss's head will fly off and start spinning around the room. This is an inconvenience, but can still be avoided while attacking the boss's body. After a few more hits the boss will be defeated.