From Zelda Dungeon Wiki
Jump to navigation Jump to search
Want an adless experience? Log in or Create an account.
Stalblind 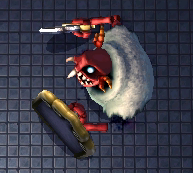 Stalblind appears to be lorulean counterpart to Blind, and resembles a skeletal version of Blind's form in the Dark World. Unlike Blind, it is never stated if Stalblind was ever a human.

Once Link enters the boss room, he is separated from the Thief Girl. They are then laughed at and asked if they actually thought he would let her escape with Link. Afterwards, Stalblind appears in the middle of the room, swinging his sword and begins the fight. At the beginning, he cannot be hurt, but guards himself with a large sword and shield in which Link can merge onto. Stalblind becomes confused and leaves his guard down, allowing Link to hurt him with the Master Sword. After a few hits, he becomes murky and moves into a corner where he spews out black smog at Link. At this point, Stalblind uses his sword to attack him. After swinging his sword, he becomes vulnerable and uses his shield to guard if Link attacks him, allowing him to merge with it and deal more damage to the boss. Sustaining more hits from Link's sword, Stalblind tosses his shield into the pit surrounding the boss room and begins to use more sword techniques against Link such as Spin Attacks and vertical slashes, becoming vulnerable for the rest of the phase.

Once Stalblind begins to flash red after being dealt with more damage, he removes his head from his body and starts spinning across the room, spewing out black smog similarly to his previous phases, while the body roams around the room and randomly swings its sword around. While the head is invulnerable, Link can still damage him by slashing at the body while avoiding the attacks from Stalblind's head and body. Once Link has defeated Stalblind, he is reunited with the Thief Girl, and another exit to the Thieves' Hideout opens. Exiting the dungeon, she leads Link to where Stalblind hid the portrait of Osfala in which a Heart Container can be found nearby.