From Zelda Dungeon Wiki
Jump to navigation Jump to search
Want an adless experience? Log in or Create an account.
Fire Gimos 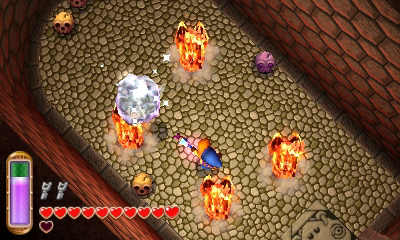 Fire Gimos are an enemy that appear in A Link Between Worlds. They appear only in the Turtle Rock dungeon, first as the Mini-Boss of the dungeon.

Like other fire based enemies in A Link Between Worlds, these enemies cannot be directly attacked with the sword. They must first be hit with the Ice Rod, which will remove their fiery barrier. The sword can then be used to hit the Gimos, after which the fire surrounding it will reappear. They take several hits to defeat, so this process must be repeated several times.

Fire Gimos are closely related to Ice Gimos, another enemy that appears in A Link Between Worlds.