From Zelda Dungeon Wiki
Jump to navigation Jump to search
Want an adless experience? Log in or Create an account.
Yuga Ganon 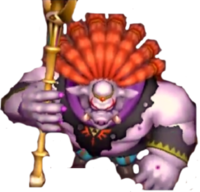 Yuga Ganon is the combined form of Yuga and Ganon in A Link Between Worlds. He is the final boss of the game. He is often referred to as "YuGanon" by fans.

Ganon, having been sealed away after the events of A Link to the Past, has been resurrected by Yuga using the descendants of the Seven Sages. Upon entering Lorule for the first time, Link witnesses the resurrection of Ganon along with his fusion with Yuga atop Lorule Castle. He tries to attack Link, but he is stopped by a raven-haired princess named Hilda. Link does not encounter Yuga Ganon again until he has collected the paintings of each of the Sages' descendants, as well as the Triforce of Courage. When Link reaches the top of Lorule Castle once again, Hilda steals Zelda's Triforce of Wisdom and uses it to summon Yuga Ganon, ordering him to battle Link and take his Triforce of Courage. After Yuga Ganon is defeated by Link, the beast turns Hilda into a painting and absorb her Triforce of Wisdom, making him even more powerful. After losing once again to Link, Hilda and Zelda are released from their paintings.

The battle with Yuga Ganon occurs on top of Lorule Castle. This boss has two phases.

Before Yuga Ganon has absorbed the power of the Triforce of Wisdom, Yuga appears in random places around the room trying to either stab Link or slash at him with his trident. These attacks can be avoided by simply standing behind Yuga Ganon, or getting out of his range when he appears. Slash at his back when he preforms trident attacks to weaken him.

As Yuga Ganon loses health, he becomes a bit more difficult to battle. He slashes twice at Link instead of once, and often throws his trident around the room, disappearing and reappearing in a different location to catch it. Avoid this as it deals a lot of damage on contact. He also summons energy balls that fall from the ceiling, but these can be dodged simply by moving quickly around the room. Keep slashing at Yuga Ganon wherever he reappears to damage him further, remembering not to be too hasty as to take damage from any of his attacks.

It may also be noted that during this first phase, Link cannot merge into the walls as a result of a dark magic that Hilda has placed on them. In this phase, the Bow, Fire Rod, Tornado Rod, Nice Hookshot, Hammer, Lantern, and Bug Net can also be used to hurt Yuga Ganon.

The second phase of the battle begins with Dead Man's Volley. Yuga Ganon tosses energy balls at Link that can be deflected either with his Sword or the Bug Net. After the ball is exchanged a few times, it hits the boss. At this point, he merges into the wall and Princess Zelda gives Link the Bow of Light. Link must enter the wall, shoot Yuga Ganon with the Bow of Light to hold him in place, exit the wall, run around the boss, re-enter the wall and shoot him in the back. This causes Yuga Ganon to fall out of his painting, giving the hero a chance to slash at him with his sword.

Yuga Ganon now shoots several pink birds from the walls of the room. These can be obnoxious, as they move quickly and are tough to avoid. Eventually, he begins a second volley with Link, which lasts longer than it had previously, ending once again with the boss being hit and entering the wall. This time, when Link shoots a light arrow at the beast from within the wall, he blocks it and charges at Link furiously. The trick here is to emerge from the wall as he is running so that Link can get behind him and hit him in his back. He once again falls out of the wall, where he can be slashed.

During the third and final round of Dead Man's Volley, Yuga Ganon uses two energy balls at the same time. Slash rapidly to send both back at him, and eventually, as before, he enters the wall. Here, the boss always blocks arrows from the front. Link must shoot an arrow at his front and then quickly turn around to fire the arrow in a full circle around the room to hit the boss in his back. Yuga Ganon is defeated upon a few more slashes after he falls out of the wall.