From Zelda Dungeon Wiki
Jump to navigation Jump to search
Want an adless experience? Log in or Create an account.
Armos 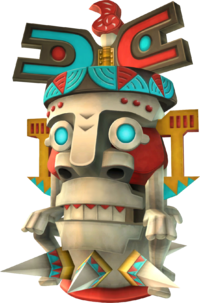 Armos, or Armos Statues, are recurring enemies in The Legend of Zelda series. They are living statues that come to life upon contact and appear in every game in the series except The Adventure of Link and Four Swords.

Armos are found throughout Hyrule. They are immobile and harmless at first, but when Link makes contact with them, they come to life and start moving around at one of two speeds. If Link touches one from the front, he will immediately take half a heart of damage. They take three hits from the original Sword, two hits from the White Sword or one hit from the Magical Sword to be defeated. One bomb will also destroy them, and they are also vulnerable to arrows, the Candle and the Magical Rod.

Link can often find secrets such as stairs and items beneath these statues. These can only be accessed by touching the Armos so it moves away from the spot it is guarding. Some Armos guard Item Shops, while one guards the Power Bracelet.

Armos are statue enemies that reside in the ruins outside the Eastern Palace. They look like normal statues until Link makes contact with them, after which they will hop after Link. A good few hits from the sword should take care of them, but it is still preferred to remain cautious with them. These enemies are similar to the six Armos Knights that Link will fight in the Eastern Palace.

If Link touches an Armos, they will randomly move around the room. If they touch Link, he will lose two hearts. They can be found in the overworld. Two ways to defeat them (because the sword does no damage) is to attack them with a bomb or shoot them with the Hookshot and place a bomb nearby.

Armos appear as brown, rounded monstrous statues with a pair of orange curved horns and a smaller pair of short black horns on their head, a pair of red eyes, a wide nose and a patch of grey stone with a zigzag-esque pattern running through on its face, a grey, segmented column-like body and a pair of hands wielding a sword and an orange shield. Found within Dodongo's Cavern and the Spirit Temple, they sit completely still until Link touches them, at which point they come to life and start chasing Link. If not defeated fast enough, they will return to their original position and revert into a statue. Upon defeat, they will flash red and jump around before exploding. Making contact with them or being caught in their explosion will deal a half heart of damage. To defeat them, Link must use bombs, Deku Nuts or, as an Adult, the Megaton Hammer.

There are statues that resemble an inactive Armos that don't come alive upon contact and are often used for puzzles where they are to be pushed or pulled onto a floor switch. In the Spirit Temple, there is a particular puzzle where Link will need to trigger a live Armos to step over a floor switch to open a doorway.

Armos are only found in the Stone Tower Temple and appear and behave identically to their Ocarina of Time counterparts. The strategy to defeating them is additionally identical save for an additional weakness to Goron Link's punches.

Like other games, Armos come to life by touch, but one difference is that there are two types of them: red and blue. The red ones only come to life when Link activates a switch. They then move around the room. The three ways to defeat them are to place a bomb next to them (which can be difficult), hit them with the Magic Boomerang twice, or simply hit them with Biggoron's Sword, which can only be found with a secret. The blue ones can be harder to defeat because they move really fast and also because they activate whenever Link walks past them. To defeat them, Link must either slash them with the sword three times or by blowing up bombs nearby twice. Both of them can take a single heart away if they touch Link.

In The Wind Waker, Armos work mostly the same way as usual. Instead of bombs, its weakness is a crystal on its back. It can be easier for Link to attack this weak point once it is stunned in the eye by an arrow. When they are defeated, they jump around like crazy with no direction as a last resort before exploding.

In The Minish Cap, Armos were built by the Minish for the Wind Tribe a long ago, and they can be found in the Wind Ruins. Like other games, they remain completely still until Link touches them. Link can either de-activate or activate them while he is in Minish form. This is done by climbing up the steps on the front of the Armos, where there will be a special switch. When de-activated, they will not move at all. To defeat them, Link must activate them and then slash at them with the sword while he is in Human form.

According to Swordsman Newsletter issue 8, the Armos were the creation of the Minish.[citation needed]

Found in the Temple of Time and the Cave of Ordeals, Armos will sit completely still until Link approaches them, at which point they come to life and jump around while swinging their hammers. The crystal on their back is their only weak point. Link can use the Back Slice or smash them with the Ancient Statue's hammer while one is controlled with the Dominion Rod. Three shots to the back from a Clawshot will also take one down. Upon defeat, they will jump around swinging their hammer wildly before exploding.Being hit by their hammer takes away half a heart.

Armos will slowly hop toward Link. All Link has to do is toss a bomb at it and it will simply de-activate, allowing Link to push the body on to a switch. Their only attack is contact, which takes away half a heart.

In Spirit Tracks, Armos only appear as a mount for Miniblins in the Tower of Spirits. The actual Armos is invincible, but it disappears once the Miniblin riding it is defeated, which is only possible when Link is being carried by Zelda while she is possessing a Phantom.

Armos are statues found in various areas throughout the Lanayru Province. To defeat them, Link must use the Gust Bellows to spin the colored screw on top of their head, opening their mouth. From here, Link can slash the crystal inside their mouth, or place a bomb inside to kill them.

Armos appear in the same fashion as they do in The Wand of Gamelon.

These iron-clad enemies carry large spears and will try to hit Zelda with them. Their only attack is to slowly walk up to Zelda and strike her with their spear. Some Armos have large amounts of health as it will take three sword attacks to defeat one. Alternatively, a single bomb will also defeat an Armos. These enemies will leave behind a green ruby as a spoil once they have been defeated.