From Zelda Dungeon Wiki
Jump to navigation Jump to search
Want an adless experience? Log in or Create an account.
Stalkin 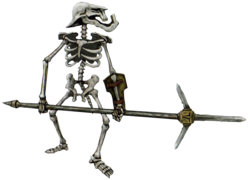 A Stalkin is an enemy Link encounters only in Twilight Princess.

Stalkin are basically a smaller version of the Stalfos. They usually attack in large numbers, surrounding Link. Because of this, the best strategy to defeating them is to use Midna's Charge Attack while in Wolf form, which defeats them all. Alternatively, Link can stab them with the Sword while in Hylian form. Additionally, the Spin Attack in Hylian form can also be effective. They pop out of the sand, and only come up if Link comes too close to them. They can be quite challenging in large groups, but are fairly easy if in small groups.

Stalkin are only found in dungeons, including the Arbiter's Grounds, Cave of Ordeals, and Hyrule Castle.