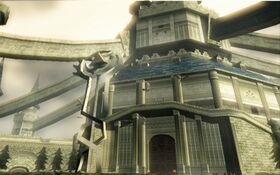 Hyrule Castle is the final dungeon in Twilight Princess. It isn't the longest dungeon in the game; however, it does contain a collection of some of the most difficult enemies as well as puzzles. Hyrule Castle seen in this game is the largest yet and seems to be heavily fortified. The dungeon is split up into two main sections. The outside section contains a large courtyard that spans around the circumference of the castle, while the inner section of the castle contains many rooms and towering floors. The castle still remains in pristine condition despite the fact that it has been taken over by evil.

Link and Midna go to Hyrule Castle directly after learning from Zant that his God, Ganondorf, has escaped the Twilight Realm, and has been reborn in the Light World.[1] Midna makes the connection to the strange barrier that has taken shape surrounding Hyrule Castle. She uses the Fused Shadows to destroy the barrier and open the entrance to Hyrule Castle.

The first obstacle for Link as he enters the Hyrule Castle Courtyard is to collect a key to unlock the entrance to the actual castle portion of the dungeon. This objective leads him into a fight with one of the Mini-Bosses of Hyrule Castle, King Bulblin. Once Link has gotten the key and has entered the castle, he faces off against the other two Mini-Bosses of the dungeon; a Darknut and an Aeralfos. Eventually, Link makes his way to the top of the castle, and into the Throne Room. Here, he finds Ganondorf, sitting on the Throne of Hyrule. They chat; which mainly consists of Ganondorf calling the Dark Interlopers' attempt to defy the gods pathetic.[2] He later admits that they had possessed some skill, just lacked power.[3] Soon enough, Link and Ganondorf begin the final fight of the game; an epic four-phase battle that requires Link to have mastered everything he has learned throughout his adventure. 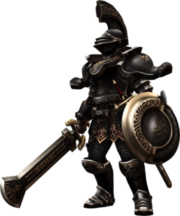 Hyrule Castle features three separate Mini-Bosses, all of which are very difficult enemies that are each much too familiar to Link. The three Mini-Bosses include King Bulblin, a Darknut, and an Aeralfos. The first battle is against King Bulblin in the Hyrule Castle Courtyard. This battle is very similar to the one that Link encountered in the Bulblin hideout within the Gerudo Desert, where King Bulblin was guarding the entrance to Arbiter's Grounds. This time King Bulblin is more defensive and Link must be tactical in order to strike Bulblin. Link can utilize the Hidden Skills#Back Slice or the Hidden Skills#Helm Splitter, that he previously learned from the Hero's Spirit. The reward for defeating him is the key that will unlock the door that leads to Hyrule Castle. Next up is the battle against the Darknut. It is not any different from any Darknut fight Link has encountered before, now that Link is more experienced he can make short work of the Darknut. The only reward for winning this battle is the ability to move on in the dungeon. The final Mini-Boss battle in Hyrule Castle is against an Aeralfos. The Aeralfos is an enemy that Link has seen multiple times before, mainly inside the City in the Sky. The reward for defeating it is another Small Key, which allows the young hero access deeper into the dungeon. 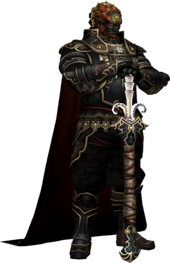 The Boss of Hyrule Castle, who is also the Final Boss of Twilight Princess, is a very common The Legend of Zelda villain, Ganondorf. The battle against Ganondorf has four different phases, all of which involve Ganondorf being in a different form. In the first phase, he possesses Zelda and uses her as a puppet to fight Link. During the second phase, Ganondorf transforms into his beast Ganon form, much similar to the final battle against Ganondorf in Ocarina of Time. The third phase takes place on horseback in Hyrule Field. The fourth and final phase is a classic Sword-and-Shield battle, where the best swordsman will win. Ganondorf wields the Sword of the Six Sages, the same one the Ancient Sages tried to kill him with, which he kept after being imprisoned into the Twilight Realm. After hitting Ganondorf with the Ending Blow, he stands helplessly and uses his last breath to speak to the young hero. He tells Link to not think that this is the end,[4] saying the history of light and shadow will be written in blood.[5] It is then that the Triforce of Power leaves Ganondorf, and he ultimately dies.

Hyrule Castle features the same four Dungeon Items that all dungeons in Twilight Princess have; the Dungeon Map, the Compass, the Big Key, and the Small Keys.

The Dungeon Map can be found in a Treasure Chest while Link is searching the left side, right side in the GCN version, of the Hyrule Castle Courtyard. The chest is guarded by a fence, and the only way to move this fence is for Link to use the Gale Boomerang on the windmills in the area. The windmills need to be turned on in a specific order that is detailed on the ground. Striking each windmill in the appropriate order allows Link the opportunity to grab the Dungeon Map.

The second Dungeon Item is known as the Compass. The Compass shows Link the location of every Treasure Chest in the dungeon by displaying a small icon on the map which corresponds to the actual location of the chest. It can be found in the first room of the actual castle portion of the dungeon on the platform that Link can climb to with his Clawshot. The chest does not appear until Link has defeated all the Bokoblins and Lizalfos in the area below.

The Big Key is the one and only key that has the ability to open the locked door that guards the Throne Room, the location where Ganondorf lies. It is found in a large chest inside Hyrule Castle.

In total, there are three Small Keys found in Hyrule Castle that all unlock a locked door somewhere in the dungeon. The first is acquired after defeating King Bulblin. The second is found in a chest in the secret area to the north of the castle, and the final one is found on a balcony area inside Hyrule Castle, being guarded by an Aeralfos. Only two of these three keys are required to complete the dungeon, the third one is completely optional. If completed, it allows Link to enter a room that can be found directly beside the locked Boss Door. It is filled with chests that contain Rupees and other goodies.

Hyrule Castle contains a total of 27 Treasure Chests, which is by far the most of any dungeon in Twilight Princess. Inside all these Treasure Chests are items that can be split into three main categories: Rupees, Dungeon Items, and Regular Items.

In total, there are sixteen Treasure Chests in Hyrule Castle that house any amount of Rupees. Two of these chests holds the most valuable rupee in the entire game, the Silver Rupee. It is worth a whopping 200 Rupees, and is extremely rare. The next two chests both carry a single Orange Rupee, which in Twilight Princess is worth 100 Rupees. The third most valuable rupee in Twilight Princess, the Purple Rupee, can be found in three chests. Of the 9 remaining chests, four hold a Red Rupee, two hold a Yellow Rupee, one carries a Blue Rupee, and the final two house a single Green Rupee. That's a total of 857 Rupees waiting to be collected. Unfortunately, Rupees are pretty much useless at this point in the game, so they don't hold much importance to Link. However, if the young hero has the Magic Armor then he can use the large amount of Rupees as a life source.

There is a large assortment of Regular Items that are found in Treasure Chests throughout the dungeon. These items include Pumpkin Seeds, Bombs, Arrows, and Water Bombs.