From Zelda Dungeon Wiki
Jump to navigation Jump to search
Want an adless experience? Log in or Create an account.
King Bulblin 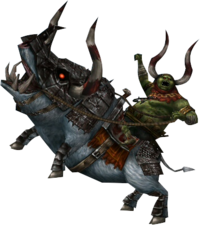 King Bulblin is a character and a major enemy in Twilight Princess.

King Bulblin is one of Zant's most loyal followers.[1] He is the King of the Bulblins, and is also the only major enemy that Link fights more than once, four times in fact. He is a very large Bulblin, about three times as big as the regular ones, and his Boar is extra large too. He owns a horn, which can summon Shadow Beasts, and sometimes a very large hammer, which he uses in battle against Link.

King Bulblin kidnaps Ilia and the other Ordonian children at the beginning of the game, and Link witnesses it inside the Ordon Spring. Later in the game, he takes Colin for a second time. Link saves Colin from the Bulblin King, and knocks him off the Bridge of Eldin.

King Bulblin is a very tough enemy, and despite being knocked off two bridges (Bridge of Eldin and Great Bridge of Hylia), and slashed by the sword many times; he does not die. In fact, he never truly dies in this game. The last time Link defeats him, he essentially tells Link that he is stronger than Ganondorf and that he himself follows the strongest side. He then gives him a Small Key. This shocked Midna, because before this fight he did not talk, and it was unknown that Bulblins could speak.

King Bulblin will blow his instrument and summon Bulblins to join him in battle. There are two Bulblins per each Bullbo. You can slash at the Bulblins but King Bulblin is your main target. Use all of Epona's dashes to catch up with him and then slash away with your sword, removing a piece of King Bulblin's armor each time. King Bulblin will then dash away. Let your dashes rejuvenate and then make another attack towards King Bulblin. Be careful as the Bulblin Riders will shoot arrows towards Link and try to knock you off of Epona. Keep repeating the same process until King Bulblin is weak and stumbles northward to the Bridge of Eldin.

The battle is similar to the one that took place on the Bridge of Eldin. While riding towards King Bulblin, use the Bow and Hawkeye, if obtained the latter, to aim an arrow directly at him. Avoid crashing into him and ride over to the other side. Epona will turn around automatically and then ride back towards King Bulblin. A second arrow shot will send King Bulblin crashing over the edge of the bridge and the gate keys will fly towards Link.

This time King Bulblin holds a ridiculously large axe. He knocks his Bullbo to the ground and begins coming after Link. The battle is really not that difficult. Using the back slice technique and the helm splitter are very effective against King Bulblin. Even the mortal draw we just learned is quite effective. Use a mixture of sword techniques to defeat King Bulblin once again. Watch out for his strong axe attack as it will do quite the damage.

This battle is identical to the battle in the Bulblin base. He can easily be stunned with a sword slash. The back slice and the helm splitter work wonders against him as well. Just keep nailing him with attacks and he won't even get a chance to swing at you. 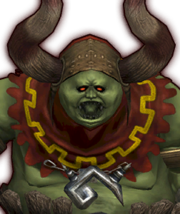