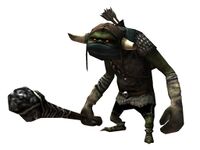 Bulblins are enemies that appear in Twilight Princess and Spirit Tracks.

Bulblins are one of the most common enemies in Twilight Princess. They attack Link with their clubs, and are also the weakest type of Bulblin. A Back Slice defeats them instantly. They can be found in most of the areas around Hyrule, and are the first enemy Link encounters after exiting the Twilight-filled Hyrule Castle at the beginning of the game. There are two other variations of the standard Bulblin; a Bulblin Archer and King Bulblin.

A Bulblin Archer is very similar to a Bulblin Warrior, the only difference being an Archer attacks with Fire Arrows and from a distance where the Warriors attack with a club from close range. They are slightly less common, but are still one of the more basic enemies found in the game.

King Bulblin is the king of the Bulblins, and he is in charge of their movements and attack methods. He and Link fight numerous times throughout the game, including two situations where Link had to knock him off his stead, Lord Bullbo, and thus off the bridge they were fighting on. Another fight between the two occurs in the Bulblin Fortress, in one of the final areas. Also, King Bulblin is one of the three Mini-Bosses found in the final dungeon of the game, Hyrule Castle.

This Bulblin rides around next to Link's train, shooting Bomb Arrows at him. The only way Link can defeat it is to shoot it with the Spirit Train's cannon. Bulblin Riders are located in the Forest Realm and Snow Realm.