From Zelda Dungeon Wiki
Jump to navigation Jump to search
Want an adless experience? Log in or Create an account.
Blastworm 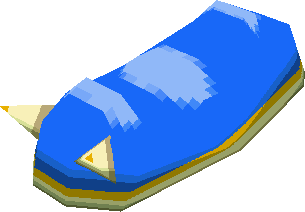 "Creepy crawlers known as Blastworms reside in the Forest Temple. Strike one with Link's sword to make it curl up into a spiky ball that's dangerous to touch. Once curled, a Blastworm is moments away from detonating, just like a bomb. Use the Whirlwind to knock these beasts into remote switches, bomb blocks, and enemies for explosive results."

Blastworms are found within the Forest Temple. They appear as small light blue and white worms who walk around the ground, trying to attack Link. Simple sword strikes get rid of these creatures quite easily.

Once Link has defeated a worm, it turns into a spiked ball. Link can use his sword to blow up the ball, or use the Whirlwind to blow this spiked ball into another enemy or cracked block. This is useful in breaking cracked boulders or defeating various enemies and bosses. Link uses them to defeat the boss of the Forest Temple, Stagnox.