From Zelda Dungeon Wiki
Jump to navigation Jump to search
Want an adless experience? Log in or Create an account.
Big Blin 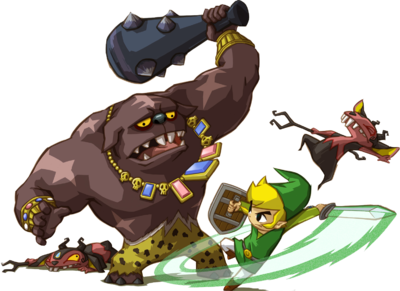 "Don't get greedy while battling a burly Big Blin. Slip in, land a few hits, then dart out of range before it unloads a heavy blow. Big Blins are relentless and can take a lot of punishment, so repeat this sequence to keep the Big Blin at bay and eventually drop the brute."

Big Blins are enemies from Spirit Tracks. These giant bulldog-like creatures resemble Moblins from other Zelda games. Similar to the Moblins from The Wind Waker, these enemies wear a Pirate Necklace around their neck. They also wield a giant club, a similarity they share with the Club Moblin from Ocarina of Time.

Given that they are a part of the Moblin family, a Big Blin is often accompanied by a group of Miniblins.

The Big Blin does not appear to have much intelligence. While it wields the massive club and tries to attack Link with it, it will even attack and defeat its own Miniblin brethren if they are in the way.

First encountered on a Warship in the Ocean Realm, Big Blins also make appearances within the Pirate Hideout and within the Take 'Em All On challenge. If Link's train is ever ambushed by a large Warship, a Big Blin could be on board for the attack.

The first time Link fights a Big Blin is when he is transporting Carben to the Ocean Sanctuary. After fighting off a group of Miniblins, the train will be ambushed by the Big Blin. Throughout the battle, additional Miniblins will continue to jump on board the train through the windows. Link must fight off the Big Blin and Miniblins to protect Carben, who stands at the right end of the train.

The club that the Big Blin wields can be quite devastating. It only does a half heart of damage, but it will also send Link flying across the train and leave him stunned momentarily. This gives the Big Blin plenty of time to close in on Link and any passenger that might also be on board. Whenever the Big Blin is gearing up for an attack, be sure to dodge out of the way to avoid the attack. As the Big Blin gets weakened, it will follow up its forehand attack with a backhand attack. Be wary if the Big Blin holds his backhand attack momentarily, as he is gearing for another strike.

The sword is an effective weapon against the Big Blin, but it will take a long time to defeat the enemy. Just keep attacking the Big Blin in between its own attacks. Additionally, Link can toss bombs at the Big Blin to do some additional damage.

If Link has a passenger on board with train, then Link must also worry about protecting the passenger. Keep an eye out for the raids from other Miniblins that jump on board and be sure to defeat the as soon as they come on board. Additionally, Link can sneak behind the Big Blin, causing it to turn around momentarily, which stunts its progress from walking to the right side of the train. This will give Link more time to defeat the Big Blin before it can reach Link's passenger. 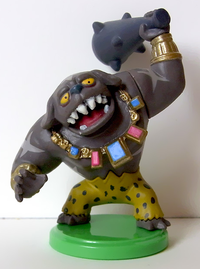 Front of the Big Blin Figure

A Big Blin figure was one of the 12 figures that were a part of the Spirit Tracks Furata Choco Egg Trading Figures set. These figures were sold in Japan at the cost of 157 Yen each.