From Zelda Dungeon Wiki
Jump to navigation Jump to search
Want an adless experience? Log in or Create an account.
Carben 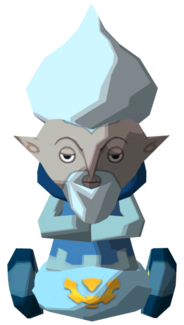 Carben is the Lokomo of the Ocean Realm in Spirit Tracks.

When Link first travels to the Ocean Sanctuary to find Carben, he instead finds a note that he is in Papuchia Village with his "sky friends". To bring him down from the sky with the birds, Link must learn the Song of Birds. After playing this and talking to Carben, he must escort him back to the Ocean Sanctuary while fending off a pirate attack. Once there, Carben gives Link a Force Gem as thanks, and after his Lokomo Song is played, a path to the Ocean Temple is revealed. During the duet between Carben and Link, Carben will play his part with his flute.

Besides his appearance in the Ocean Realm, he also makes a short appearance at the end of the game along with the rest of the Lokomo during the fight against the Demon King, Malladus.