From Zelda Dungeon Wiki
Jump to navigation Jump to search
Want an adless experience? Log in or Create an account.
Spirit Train 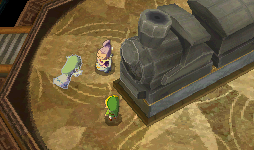 The Spirit Train is Link's mode of transportation across New Hyrule in Spirit Tracks. It is received from Anjean at the Tower of Spirits after Link loses his train and is forced to go through the Tunnel to the Tower. Once there, Anjean gives Link the Spirit Train so he can get around the overworld. After a certain point in the game, Link can replace the parts of the train by other parts. Linebeck III trades the parts for treasure. Link can then swap the parts at Alfonzo's workshop in Aboda Village.