From Zelda Dungeon Wiki
Jump to navigation Jump to search
Want an adless experience? Log in or Create an account.
Anjean 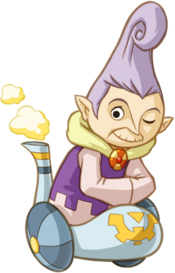 Anjean (Pronounced /æn ˈjin/, an-JEEN) is a character in Spirit Tracks. She is the protector of the Tower of Spirits, and plays the role of a guide for Link and Zelda on their quest, giving them direction and information throughout their adventure. She is one of the six members of the Lokomo race found in Spirit Tracks. Her age is never stated expressly, but it is known that she is probably old enough to have known Tetra when she first arrived in New Hyrule, which makes her over a century old. She likely entrusted this ancestor of Zelda's with the Spirit Flute which was ultimately passed down to her.

Zelda's investigation of the Spirit Tracks' disappearance leads her to seek out the Spirit Tower's sage, and she enlists Link's help to escape from Hyrule Castle. By the time the two of them come before Anjean, the Spirit Tracks are completely gone, and Zelda has been separated from her body. Upon their arrival, Anjean relates the story of how the Demon King Malladus was bound, thus creating the Spirit Tracks, and also informs them that Zelda's body is likely going to be used by Chancellor Cole as a vessel for Malladus to return.

She also has a plan to prevent this return, and convinces a ghostly Zelda to do what she can to aid Link in his quest to recover the Rail Maps and restore the integrity of the Demon King's prison. Byrne attempts to interfere after they collect the final Rail Map, but Anjean teleports Link to the first floor and confronts Byrne herself, allowing Link to continue to the Fire Temple. 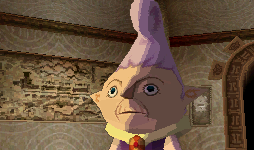 While Link succeeds in collecting all the Rail Maps and restoring the tracks between each Temple and the Tower of Spirits, Byrne manages to stall Link just long enough for Chancellor Cole to complete a ritual involving Zelda's body before Link and Zelda can retrieve it. Due to this ritual, Malladus' strength recovers to such a degree that he is able to possess Zelda's body regardless, and thus escape from his prison to wait in the Dark Realm for his full strength to return so that he might wreak havoc on the land once again. Malladus is not grateful for Byrne's help, however, and simply knocks him out when he asks to be granted the power he has earned. Zelda and Link compassionately decide to leave Byrne in the care of Anjean, who nurses him back to health in spite of his recent actions.

Anjean now realizes that restoring the Demon King's prison will not be enough, and that he must be fought again in order to weaken him before he can be sealed. Thus, she gives the heroes a Force Gem that enables them to access the Sand Sanctuary, and obtain the Bow of Light, the only weapon that can drive Malladus from Zelda's body. Upon returning to Anjean with the Bow of Light in hand, Byrne reawakens and decides to help the heroes by sending them back to the Tower of Spirits to obtain the Compass of Light, which will point the way to the Dark Realm where the Demon King resides.

Anjean accompanies Link and Zelda on the Spirit Train to the final battle against Cole and Malladus. She and Byrne offer to assist them, but Zelda and Link insist that they can do it on their own. While the two of them do succeed in driving Malladus from Zelda's body, Zelda is unable to re-enter her body at first. Byrne sacrifices himself in order to prevent Malladus from reentering Zelda's body. Malladus enters Cole's body instead, turning into a powerful demon which is ultimately defeated by Link and Zelda.

Zelda apologizes to Anjean after the battle is over, because she feels responsible for Byrne's death, but Anjean reassures her that her guilt is unnecessary, both because it was his will, and because his spirit will live on and return in another form. With that, she announces that she will be returning to the heavens with Byrne because her protection is no longer needed, and rises out of her chair, transforming into a pink ball of light before ascending out of their sight.