The Legend of Zelda: Hyrule Historia

From Zelda Dungeon Wiki
Jump to navigation Jump to search
Want an adless experience? Log in or Create an account.
Hyrule Historia 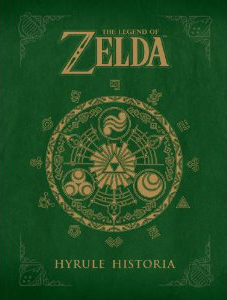 Hyrule Historia is an official book about The Legend of Zelda series, featuring previously unreleased concept artwork, a section detailing the official series Timeline, and a preview of the Skyward Sword manga. It also contains a foreword by Shigeru Miyamoto and an afterword by Eiji Aonuma, who served as Supervising Editor for the book. It was originally published by Shogakukan on December 21, 2011 in Japan. Dark Horse Books published an English version on January 29, 2013 for $34.99 as well as a Collector's Edition set at $70.00, limited to 4,000 copies.[1]

The first section is all about Skyward Sword, which was released just one month prior to this book. It reveals much of the design process of many of the game's characters and locations and includes some commentary relating these elements to the rest of the series.

The History of Hyrule

This section begins by presenting the official ordering of each game in the series, which had previously been kept top-secret.[citation needed] It then tells the story of each game, in order, including events that happen in-between games. Even details about individual characters, items, and locations are included in sidebars.

This section of the book includes previously unreleased concept artwork for all the Legend of Zelda games, except for The Minish Cap, Four Swords, and Four Swords Adventures unfortunately. They include info and all side notes that were made. There is also a 'Character Changes in Design', showing the different designs of Link, Zelda, and Ganondorf over the years; and a 'Games Catalog' section, showing every Zelda game made to that point, with the different designs of the box artwork in different regions and information about the games.