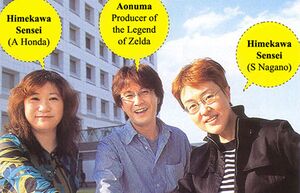 Akira Himekawa, also known as or published as Himekawa Akira or 姫川 明, is a collaboration name by two authors, A. Honda (本田A, Honda A) and S. Nagano (長野S, Nagano S).[1] Together this pair is collectively known as Akira Himekawa and have authored most of The Legend of Zelda Manga.

Honda A:
Birth Date: June 19
Favorites: Fruits, Godzilla, "Terminator"
Childhood: When she was a kid, she used to play with boys. She wanted to be an animator.

Nagano S:
Birth Date: May 5th
Favorites: Miso Soup
Childhood: She started to draw manga when she was 11 years old, Her dream was of course to be a Manga artist![1]

Akira Himekawa has also created some Legend of Zelda artwork on commission, with permission from Nintendo. A gallery of such work can be seen below. Some of these pieces had the commission go towards Earthquake fundraising in Japan.[1]