The Legend of Zelda: The Minish Cap (Manga)

From Zelda Dungeon Wiki
Jump to navigation Jump to search
Want an adless experience? Log in or Create an account.
The Legend of Zelda: The Minish Cap (Manga) 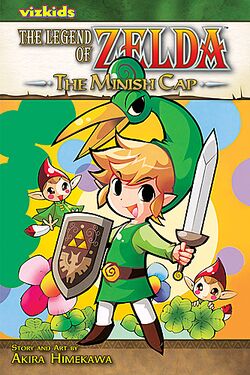 This is the official manga for The Minish Cap. It is written and illustrated by Akira Himekawa, the same artist who made many of the other Zelda mangas. It is in black and white with some pretty nicely illustrated drawings. The story more or less follows the same story as the game other than a few slight differences.

On the day of the Picori Festival, Link and Princess Zelda go to watch the sword-fighting tournament. The winner is a strange man named Vaati, who has come to claim the Light Force which is sealed within the Bound Chest. When the Light Force turns up missing, Vaati turns Princess Zelda to stone! To save his friend, Link needs the power of the Picori Blade, but only a certain master swordsmith can reforge it. Can Link find the pieces of the broken sword before Vaati does?