The Legend of Zelda: Oracle of Ages (Manga)

From Zelda Dungeon Wiki
Jump to navigation Jump to search
Want an adless experience? Log in or Create an account.
The Legend of Zelda: Oracle of Ages (Manga) 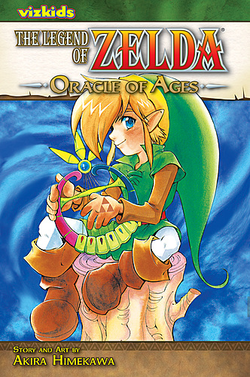 This is the official manga for Oracle of Ages. It is written and illustrated by Akira Himekawa, the same artist who made many of the other Zelda mangas. It was released as a two-part manga alongside Oracle of Seasons Manga. It is in black and white with some pretty nicely illustrated drawings. The story more or less follows the same story as the game other than a few slight differences.

After defeating the evil General Onox in Holodrum, Link returns to Hyrule. One day, Impa, Princess Zelda's attendant, asks Link to accompany her into the forest to find Nayru, the Oracle of Ages. But Veran, the evil Sorceress of Shadows, has possessed Impa in order to deceive Link. Veran then possesses Nayru and travels back to the past to kill one of Link's ancestors so that Link will never be born! Link once again battles across time to save Hyrule--and himself!