From Zelda Dungeon Wiki
Jump to navigation Jump to search
Want an adless experience? Log in or Create an account.
The Legend of Zelda: Majora's Mask (Manga) 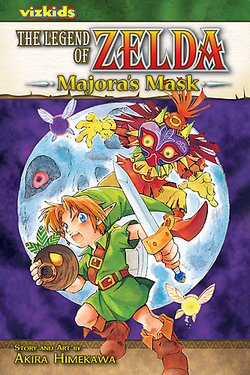 This is the official manga for Majora's Mask. It is written and illustrated by Akira Himekawa, the same artist who made many of the other Zelda mangas. It is in black and white with some pretty nicely illustrated drawings. The story differs from the game a bit and the differences can be seen below. There is also one bonus chapter at the end of the Manga that reveals the origin of Majora's Mask.

After Link seals Ganondorf in the Sacred Realm, peace returns to Hyrule. But soon Link's old friend Navi goes missing. While wandering through the forest in search of Navi, he meets Skull Kid. The mischievous Skull Kid steals the Ocarina of Time from Link and turns Link into a Deku Scrub! Setting things straight this time will take Link on an amazing journey to a parallel world where he meets new friends and new enemies!