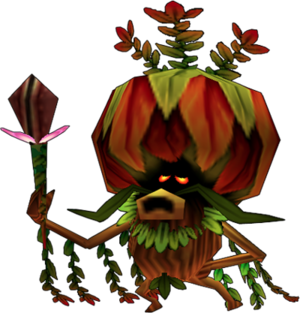 "You shall know the wrath of a king whose darling princess was taken away from him!!!"

The Deku King is a character featured in The Legend of Zelda: Majora's Mask.

When his daughter disappeared, he immediately pinned the blame for her disappearance on the Monkey who was last with her. The Deku King does not listen to the monkey's pleas about her disappearance not being his fault but that it was Odolwa, the boss of Woodfall Temple, who kidnapped her when they were attempting to learn what was behind the poisoning of the water. After the monkey teaches Link the Sonata of Awakening, it confirms the Deku King's suspicions that the monkey was behind the kidnapping since the song is considered sacred to the Dekus. He orders the guards to lower the monkey repeatedly into a pot of boiling water as punishment and has Link thrown out of the palace.

He continues his punishment against the monkey and still believes that he is the cause for his daughter missing until Link finds her being held in a cell in a secret area located in the back of Woodfall Temple. Once she learns of her father's actions towards the monkey, she has Link take her home immediately via a Bottle. He releases her from the bottle in front of her father once they are in his presence. Upon seeing his daughter safe he is relieved but he immediately finds himself being scolded by the Deku Princess due to the things he did to the monkey in his hastiness. She orders the guards to free the monkey and afterwards the Deku King apologizes to him for his rash behavior to which the monkey forgives him in return.

He is later seen during the end credits with his daughter, the monkey, and a few Deku Palace guards.