From Zelda Dungeon Wiki
Jump to navigation Jump to search
Want an adless experience? Log in or Create an account.
The Indigo-Go's 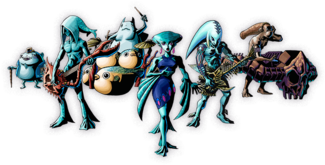 The Indigo-Go's is a very popular Zora band in Majora's Mask. So popular, in fact, that you must buy a ticket just to see them rehearse. The band includes the leader of the band, Evan the Pianist, Lulu the Lead Singer, Mikau the Guitarist, Japas the Bassist, and Tijo the Drummer. Toto is the manager of the band.

The Indigo-Go's are supposed to play at the Carnival of Time, but are initially prevented by various problems. The first is Lulu's loss of her eggs to the Gerudo Pirates and subsequent loss of her voice. The second is that Mikau has been missing since he went to get back Lulu's eggs back from the pirates.