From Zelda Dungeon Wiki
Jump to navigation Jump to search
Want an adless experience? Log in or Create an account.
Fisherman (Majora's Mask) 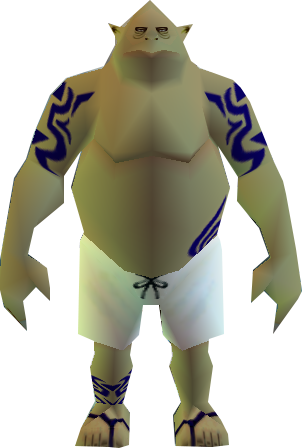 The Fisherman lives on the shores of the Great Bay in his hut in Majora's Mask. He says that he has been fishing in the bay for thirty years, and that his skill even surpasses even the Zoras.[1] However, he admits that lately, he has been having trouble catching fish, and that the water is so murky that he always ends up back at shore when he goes out on his boat.[2][3]

In the past, the Fisherman caught fish with the Hookshot that he found at the bottom of the ocean.[4][5] However, the Gerudo Pirates took it from him.[6] Link later obtains the Hookshot after sneaking into the Pirates' Fortress.

When Link first meets the Fisherman, he is in possession of a Seahorse. It is a rare fish, so he was planning on selling it at the Carnival of Time in Clock Town.[7] However, he promises Link that if he shows him a Pictograph on his Pictograph Box of a Gerudo Pirate, he will give him the Seahorse.[8] The Seahorse asks Link to take him to Pinnacle Rock, where he will guide him through the murky waters to the location of the Zora Eggs.[9][10]

After Link completes the Great Bay Temple, the Fisherman relocates to an island. There, Link can play a Jumping Game for 20 Rupees.[11] He receives a Piece of Heart if he wins. The Fisherman then complains that he was planning on buying a larger boat, and that now he may go bankrupt.[12]