From Zelda Dungeon Wiki
Jump to navigation Jump to search
Want an adless experience? Log in or Create an account.
Fisherman's Hut 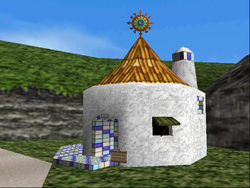 The Fisherman's Hut is a location found within the Great Bay region of Majora's Mask. Located on the Bay's Coastline, this small hut is where the local Fisherman resides. In the springtime, he runs a Mini-Game at the Fisherman's Island.

When Link first visits this location, he meets the Fisherman, who is unable to catch fish because of the murky waters that have seemed to plague the entire region due to the strange goings on in the Great Bay Temple. Inside the hut, there is a small tank containing a Seahorse who was caught by the Fisherman.[1] However, the Seahorse is eager to get back to the waters near Pinnacle Rock and see his friend.[2] The Fisherman, however, is thinking of selling the rare fish at Carnival of Time, but he also agrees to give it to Link if he snaps a photo of a Gerudo Pirate.[3] The Fisherman initially snapped a photo of a Gerudo Pirate, but was not satisfied with the photo, and he thus asks Link to snap a photo of one for him.[4]

The young hero manages to snap a picture of a Gerudo within the Pirates' Fortress with the Pictograph Box and in return he is gifted with the Seahorse, which he stores within an empty Bottle. Link can in turn use the Seahorse as a means of navigation through the murky waters that lead up to Pinnacle Rock, where he can find three Zora Eggs.[5]