From Zelda Dungeon Wiki
Jump to navigation Jump to search
Want an adless experience? Log in or Create an account.
Romani Ranch 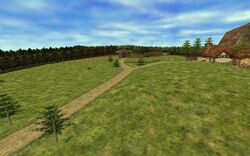 Romani Ranch, also known as Milk Village,[1] Village of Milk,[2] and Chateau Romani's Village,[3] is a Ranch from Majora's Mask. It is the source of Chateau Romani, a luxurious brand of Milk.

Romani's Ranch was originally run by Cremia and Romani's father. He is responsible for breeding the Romani-Breed of cows that produce Chateau Romani.[4] After his death, the responsibilities of the Ranch were given to Cremia.[5][6] Romani Ranch directly competes with the Gorman Brothers for sale of Milk at the Milk Bar.[7] The Gorman Brothers use questionable methods to sell their milk, such as watering it down, and lying about its nutrition.[8][9] They resort to banditry to attempt to halt Cremia's efforts to export the milk to town.[10][11] The path from Milk Road to Romani Ranch is blocked by a boulder. Link must either blow it up, or wait for one of Mutoh's men to destroy it by the Final Day. It is unclear if this was Skull Kid's or the Gorman Brother's doing.[12]

The Romani-Bred Cows are few in number, and as such are very precious to Cremia and Romani. Every year around the same time as the Carnival, ghosts appear at night to try and steal the Cows.[13] During the First Day, Romani practices using a balloon and her bow to protect the Ranch.[14] If Link talks to her during this time, Romani gives him the opportunity to practice Horse Archery using many balloons.[15] If Link successfully pops all ten of the balloons within the two minute time limit,[16] Romani asks Link to help defend the Ranch, and teaches him Epona's Song.[17] The ghosts arrive at 2 AM and Link must help fight them off until 6 AM.[18] If Link is successful, Romani gives Link a Bottle of Romani Milk.[19] However, if Link fails to fight them off, Romani, along with the Romani-Bred Cows, are abducted. Romani returns on the final day, though she suffers from amnesia about the whole event.[20]

On the Second Day, Cremia is preparing to make a shipment of Chateau Romani to the Milk Bar if Link successfully defended the ranch.[21] Otherwise, she is too distraught over losing the cows and not believing Romani.[22] She invites the young hero to come along, as she normally has company on the ride.[23][24] Along the way, the path down Milk Road is blocked, so she is forced to take a detour through the Gorman Track.[25][26] The cart is attacked by the Gorman Brothers, who attempt to destroy their shipment.[27] After successfully fending off the bandits, Cremia thanks Link by rewarding him with Romani's Mask, a sign of membership to the Milk Bar.[28]

The Doggy Racetrack is run by Mamamu Yan. The Racetrack is home to the Dog Race 500 that guests may bet on for entertainment.[30]

The Cucco Shack is home to Grog and his many Cuccos. He raises them here, and regrets that he won't be able to see his chicks grow into full Cuccos.[31]

This is the home of both Cremia and her sister Romani. The house doesn't serve much purpose in the game, but to the side of the house there lies a small stable with Link's trusty steed, Epona, inside.