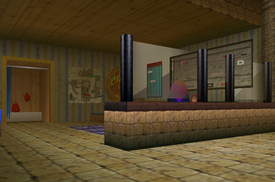 The Post Office has appeared in three games from The Legend of Zelda series, most notably in Majora's Mask. It is here where the postal service is ran.

The Post Office in Majora's Mask is the home of the Postman in West Clock Town. The Postman goes out for a run to deliver letters 9 a.m, and comes back to the Post Office 12 a.m to rest. 1 a.m, he runs out to deliver letters again. He comes back inside 3 a.m to do his 'mental training'. Link can test his skills to it, first time for free and the rest for 2 Rupees. Link has to guess when the time has hit 10 seconds, and when Link has completed the 'mini-game', the Postman gives Link a Piece of Heart.

The Post Office[1] is a location marked in the center of Lynna Village within Oracle of Ages in the Past. It is a simple small wooden building, with a bunch of shelves in the top-right. There's also a desk and chair in the top-left, where the Postman can be found. There are also a bed and nightstand in the bottom-right, suggesting that the Postman sleeps in the Post Office where he works. In the Present, the location where the Post Office was has been replaced by Mayor Plen's House.

This location plays a part in the trading sequence. If Link talks to the Postman within the Post Office, he reveals to Link that even though he wants to deliver the mail on time, he can't if he doesn't know the time.[2] If Link brings him the Poe Clock, the Postman notices it tells time, and first asks Link if he is offering him it, but then just takes it.[3] As thanks, the Postman gives Link the Stationery, and then hustles off to work.[3] Link can later use the Stationery to acquire the Stink Bag.

For the remainder of the game, the Post Office is empty.

In The Minish Cap, the Post Office makes an appearance in Hyrule Town. It is most notably used to fund the writing of the Swordsman Newsletter, written by Swiftblade.