From Zelda Dungeon Wiki
Jump to navigation Jump to search
Want an adless experience? Log in or Create an account.
Lynna Village 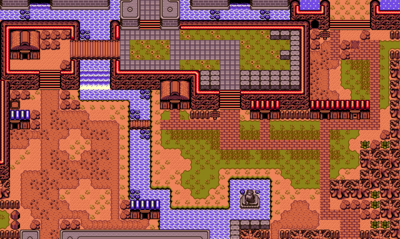 Lynna Village is one of the largest towns and one of the central hubs within Oracle of Ages. Found only in the Past, the region eventually becomes known as Lynna City in the Present. Much like Horon Village from Oracle of Seasons, a bulk of the population lives in this central town. Link travels through Lynna Village early on in his quest and returns often as he visits important locations including the Maku Tree at the northeast part of town.

Lynna Village is located in the center portion of Labrynna in the Past. There are several entrances to the town from the various surrounding areas. Fittingly, just to the northeast of Lynna Village is Northeast Lynna, a small Overworld region with little significance. To the east, there is the Coast of No Return and the Sea of No Return, but there is no direct pathway to reach these areas. Just to the south, Link fill find the South Shore as well as the Black Tower. To the west, there is a small area known as West Lynna, as well as the larger Talus Peaks. To the north, Link will find Ambi's Palace.

Compared to Lynna City, Lynna Village is very primitive town. Most of its houses are smaller than its Lynna City counterparts, and they are constructed almost entirely of wood. The Maku Tree is present, but she is merely a small sprout. The citizens are compelled by a possessed Queen Ambi to work on construction of the Black Tower for Veran's own cruel ends. Late in the game, after Link has defeated Veran, this statue changes to a statue of Link. The inhabitants of Lynna Village will then offer much praise for Link.

The town is run by Queen Ambi, who resides in Ambi's Palace to the north. The Queen was once a very kind leader, but after Nayru, who is possessed by Veran, appears in the Past, the Queen has changed her tone, making the workers work endlessly on the tower.[1]

When Link first arrives at Lynna Village, the town is filled with rubble and debris. Speaking to the residents, Link will find out that this is due to the construction of Ambi's Tower.[2] One of the residents hints that Link will need to acquire the Shovel in order to get around.[3] The tower is being constructed by the orders of Queen Ambi. She once had a Seafaring Boyfriend, but he has since set sail. Ambi is building the tower so that she can search the lands for signs of his return.[4]

In order to acquire a shovel, Link must travel to Ambi's Tower. One of the construction planners within the tower will give Link the shovel. Using the shovel, Link can dig up some of the debris within the village. At the northeast corner of the town, Link can use the shovel to enter Maku Road, the pathway to reach the Maku Tree.

At far west portion of the Village, just north of the Toilet and south of Pippin's House, Link can find the lone Soft Soil location here. Link can plant a Gasha Seed here and, after a while, it will grow to become a Gasha Tree with a Gasha Nut.

The Advance Shop is located right next door to the Shooting Gallery. As its name suggests, this shop is only accessible if the player is using the Game Boy Advance. If a Game Boy Color is used, this shop will remain closed. The store is run by Stockwell and he will sell three items for 100 Rupees a piece. These include a Gasha Seed and two Seed Rings. One of the rings is referred to as the Advance Ring and will be appraised as the GBA Time Ring.

The Lynna Village Shooting Gallery can be found near the east end of town in the double building. The door to the left leads to the Shooting Gallery. Inside Link can play the game for 10 Rupees and can win a variety of rewards including a Recovery Heart, 30 Rupees, a Gasha Seed, and a random Seed Ring. After Link completes the Moonlit Grotto, he can then win the Strange Flute from the Shooting Gallery by scoring more than 50 points. This Strange Flute will eventually turn into Ricky's Flute. 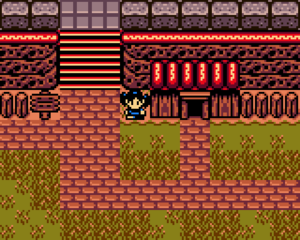 The Post Office can be found near the center part of town in the small wooden building. Inside, Link will find the Postman who currently is having trouble delivering the mail because he doesn't have a proper clock.[5] This area plays a role in the Trading Sequence, as Link can acquire the Stationery from the Postman in exchange for the Poe Clock.

Dekadin's House is marked by the small house near the center of town. Inside, Link will find Dekadin, a depressed young boy who wants to laugh away his troubles. He plays a role in the Trading Sequence as Link can tell him the Funny Joke in exchange for the Touching Book.

Ancient Adler's House is marked by the small house near the southwest part of the village. Inside, Link will find Adlar, an old man who served as an adviser to Queen Ambi for 50 years. Adlar has since been banished from his duties, ever since Nayru has appeared in the Past.[6]

At the far west end of Lynna Village, Link will find the Toilet. This small building is where Link finds ???, a character that plays a role in the Trading Sequence. Link can give ??? the Stationery, and in exchange, ??? will give Link the Stink Bag.

Pippin's House is marked by the small house at the northwest corner of Lynna Village. Inside, Link will find Pippin, a gardener who deals with Gasha Seeds. When Link first enters the house, he can speak with Pippin, who will give Link a Gasha Seed.[7] Despite being a gardener, Pippin does not seem to like his line of work, and even encourages Link not to plant Gasha seeds in the nearby soil locations.[8]