From Zelda Dungeon Wiki
Jump to navigation Jump to search
Want an adless experience? Log in or Create an account.
Ancient Castle of Ikana 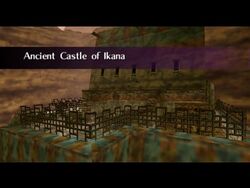 The Ancient Castle of Ikana, also parsed as the Ikana Castle, is a mini-dungeon and sub-area featured in Majora's Mask. The castle is found within the final region of the game, Ikana, where it is situated in the eastern region of Ikana Canyon. The ancient castle was once home to the great Kingdom of Ikana, but the Kingdom slowly diminished through time and the castle has been overrun with living dead. Despite the grounds becoming largely abandoned, the castle itself is still in reasonable condition.

The dungeon itself is heavily fortified and contains two main sections; the outside area circling the castle and the inner grounds. The undead as well as other devilish enemies roam the grounds, which was once graced by the people of Ikana Kingdom. The castle has quite a dark theme, which can compare to the likes of the Forest Temple and the Shadow Temple from Ocarina of Time. However, the dungeon also shows signs of lighter theme with the many sun-themed puzzles that bear resemblance to the Spirit Temple.

Link ventures to these cursed grounds once he has obtained the Mirror Shield from Beneath the Well. The young hero can then enter a small cave and utilize his newly found shield to reflect the sunlight and uncover the secret entrance. Link must primarily use the Mirror Shield here to solve numerous puzzles and thus ascend to the top of the tower. Later on in the dungeon, Link encounters a mini-boss, which is in fact a Wizzrobe, similar to the ones Link had previously fought. The young hero can then proceed to the outer section of castle, where he can traverse to the rooftop. Link must place a Powder Keg on the broken section of the rooftop to reveal a passageway into the throne room. After delving down to the throne room, Link encounters the long dead king of the Ikana tribe, Igos du Ikana. After defeating the once great king and his two subordinates, he teaches Link the Elegy of Emptiness. This song allows Link to create a lifeless shell of his physical self and aids him in traversing Stone Tower. 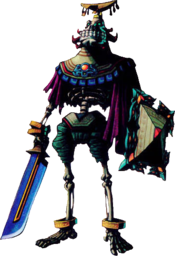 When Link first enters the Throne Room of the castle, he is greeted by Igos du Ikana, the once great king of Ikana Kingdom, and his two servants, the King's Lackeys. He first orders his two servants to attack the young hero. Link must equip his Fire Arrows and shoot the curtains, thus letting a ray of light into the room. Here Link can stand in the rays and use his Mirror Shield to reflect the light onto the two servants. This deals a heavy amount of damage each time, but Link must tactically wait for a gap in their defence as they block the sunlight with their shields. After Link has defeated the two servants of Igos, the King himself steps down and fights Link, thus initiating the second phase.

Igos is considerably stronger than his two subordinates. He not only has a wider range of attacks but he is also able to withstand a considerable amount of damage before letting his guard down. The young hero must repeat the same process as he did previously and reflect the sunlight. However, Igos separates his head from his body and the skull attempts to latch onto Link and deal a large amount of damage. Other forms of offense include a poison-like attack as well as his sword. After Link has dealt a sufficient amount of damage, the King of Ikana falls to the ground, leaving him vulnerable for attack. This is Link's opportunity to utilize his Mirror Shield and reflect the sunlight onto Igos. After repeating the process several times, Igos succumbs to defeat. Now that the spell on the soldiers and Igos has been broken, he teaches Link the Elegy of Emptiness.