From Zelda Dungeon Wiki
Jump to navigation Jump to search
Want an adless experience? Log in or Create an account.
Woodfall Temple 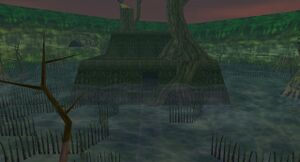 The Woodfall Temple is the first Dungeon in Majora's Mask. It is situated in the region of Woodfall to the south of Termina. More specifically, it is located within the similarly named Woodfall, which is a swamp-filled crater hidden deep within the Southern Swamp. Once Link enters Woodfall, he can stand on the Deku Altar with a Deku Scrub marked on it and play the Sonata of Awakening. This results in the dungeon rising from the poisoned water. Link can then squeeze into the Deku Flower and fly to the dungeon. Once entered, Link is required to use the Deku Mask to traverse through the many puzzles and traps.

The Woodfall Temple is said to have a dreadful smell and is made up of a stone-like structure filled with poisoned water. However, the main theme of the dungeon is predominantly forest. Furthermore, Link in time ventures to the Mini-Bosses of the Woodfall Temple, firstly Dinolfos. Once defeated, Link claims the Hero's Bow. Link later encounters the second Mini-Boss of the Temple, the Gekko, who later calls on Snapper, which he then rides on. When defeated, Link claims the Boss Key. Link can then navigate to the Boss of the Woodfall Temple, Odolwa, the tribe warrior who holds a giant machete and shield. After Link has defeated him, he acquires a Heart Container. Also, after completion, a small cutscene takes place with one of the Four Giants, in which Link has now saved. Subsequently, this leads to the freeing of the Deku Princess and the poisonous waters of the swamp clear.

Odolwa is the main boss of the Woodfall Temple and he is responsible for the kidnapping of the Deku Princess as well as one of the Four Giants, in which Link must awaken. Upon entering, the Masked Warrior drops from the ceiling and approaches the young hero. Odolwa towers over Link and he wields a giant shield as well as a dangerous machete, which he uses to both defend and attack Link. His main attacks are predominantly with his machete; however, Odolwa also summons a range of enemies and a wall of fire. Since Odolwa has a variety of movements, Link has to pick carefully on when to choose to attack. Link must wait until Odolwa's guard is down and strike him with the Bow. Once struck, Odolwa is stunned for a brief period allowing Link to attack. After finally defeating Odolwa, Link receives a Heart Container and a Mask containing the remains of the evil Jungle Warrior.

The Dungeon Map is quite an important item within the Woodfall Temple, as it shows Link the layout and direction of the many rooms of the Temple, therefore making it easier to navigate. The Map itself is the first Dungeon item Link comes across; however, it is not mandatory for completion. It is located to the right of the main chamber on the first floor. Link uses the Deku Flower to fly over to the room filled with Snappers. After defeating the Snappers, a Large Treasure Chest appears in the room, containing the Dungeon Map.

This is the second dungeon item Link comes across in the Woodfall Temple and it shows the location of every treasure chests. This helps Link locate each Chest much easier, allowing him to obtain Rupees, item drops and even the Boss Key. Much like the Dungeon Map, this time isn't necessarily needed in order to complete the dungeon. The Compass is located to the south of the block room and Link has to defeat the Dragonflies in order to make the Chest appear.

The Boss Key is the final dungeon item within this temple and unlike the Compass and the Map, it is actually compulsory, as it is needed to access the Boss Room. In this dungeon, the Boss Key is obtained right after obtaining the Hero's Bow. It is located to the north of the Deku Flower room. In this room, Link fights the second mini-boss within the Temple, the Gekko. After Link has defeated the Gekko, a Chest appears containing the Boss Key.