From Zelda Dungeon Wiki
Jump to navigation Jump to search
Want an adless experience? Log in or Create an account.
Goron Graveyard 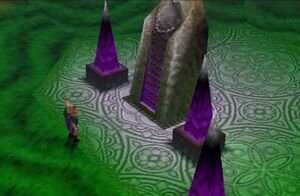 The Goron Graveyard is a location in Majora's Mask and is the resting place of the Goron hero Darmani, who died in the attempt to lift the curse of snow from Snowhead. It lies in the second region of the game Snowhead, more specifically on a cliff situated to the north of the Mountain Village. The Graveyard itself is a circular cave which contains the tombstone of Darmani. When Darmani's tombstone is pushed, Hot Spring Water will begin to flood into the cavern.

After Link obtains the Lens of Truth from Lone Peak Shrine, which allows him to spot hidden things that don't appear to the naked eye. He spots the spirit of Darmani while peering though the Lens. Darmani leads the young hero through the region and back towards the Mountain Village. Link once again equips the Lens of Truth and spots a hidden ladder, that takes him upward towards the summit of the summit of the cliff.

Once he reaches the top, Link enters the Graveyard, where Darmani asks Link to help heal is sorrows. Link equips his Ocarina and plays the Song of Healing which ultimately lays Darmani's spirit to rest. This enables Link to obtain the Goron Mask, which houses the spirit of Darmani himself. This Mask allows Link to transform into Goron Link, giving him new abilities as well as the trust from the rest of the Gorons.

Using the Goron Mask, Link can move Darmani's grave. Hot Spring Water flows out from underneath, flooding the floor. Link can bring this water with him in a bottle and use it to thaw several objects throughout Snowhead that have been covered in ice, most notable a Hidden Hole atop one of the Twin Islands, which contains another source of Hot Spring Water.